Melbourne misfire as State of Origin stars struggle to back-up.

The Wests Tigers have earned just their sixth win of the NRL season, but it came in impressive fashion downing the Melbourne Storm 22-4 at Leighcardt Oval.

Played in terrible conditions, with heavy rain before and during the game, forced the sides to change their normal gameplan, with the flamboyant style of the Tigers becoming plan D for the night.

But off the back of excellent defence and a deft kicking game from Robbie Farah and Benji Marshall, the Tigers secured their fourth win in five weeks.

Cameron Smith failed to back up from State of Origin duties for the Storm after he sustained an eye-injury in the mid-week game.

Smith’s organisation skills would have come in handy for the premiers, who at times looked lost and rushed in attack when they got into the Tigers’ danger zone.

The Wests Tigers showed they had stiff defence in the early going as they got into the arm-wrestle
with possession evenly spread.

Melbourne made several uncustomary mistakes as the home side placed pressure on them without the ball through quick line-speed and not allowing second-phase play.

A move down the short-side saw Brett Finch hit Maurice Blair with a cut-out pass to see him
bust through the line to take a vital 4-0 lead for the Storm.

Melbourne turned the ball over off the restart set gifting the Tigers a chance to hit back, but they were unable to crack the line. 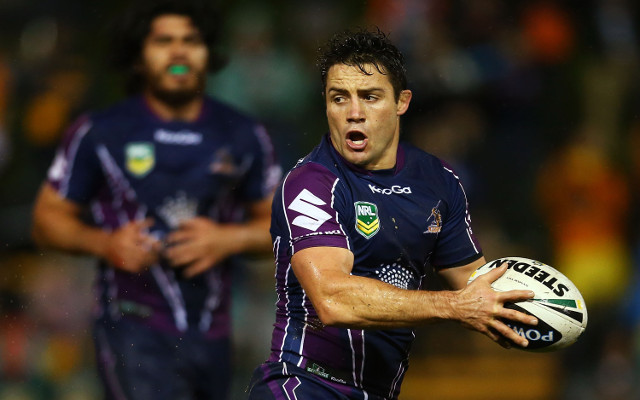 The Tigers opened their account when Tim Simona scored against the run of play after he cleaned up a loose pass and raced 75 metres to score under the posts to make the score 6-4.

Soon after, a perfect kick chase by the Tigers saw Farah kick to the corner before the three chasing players drove Billy Slater across the sideline just 12 metres out from the Storm line, typifying the desperation the side had all night.

Both sides were tempted to throw the long pass to their outside players as the opposing defensive lines were compressed, leaving space for the speed men to possibly exploit.

But the wet conditions meant any pass not right on target was a chance to be knocked-on or turned over.

Blake Ayshford put up a contender for try of the year after Simona counter-attacked from his in-goal area before linking up with Marshall and Farah allowing the Tigers centre to slide in from well short of the line.

The incredible try was just reward for the home side who’s defence had been outstanding in the first half as they jumped out to a crucial 10-4 lead just before the break.

Jason Ryles came from the field in the first tackle of the second half after sustaining a medial ligament strain and did not take any further part in the game.

The Storm continued to make mistakes coming out of their own half as Justin O’Neill knocked the ball
on at the play-the-ball just 20 metres off his own line.

As a result the home side earned a penalty next to the posts and Marshall potted the chance to make the lead beyond a converted try for the Tigers. 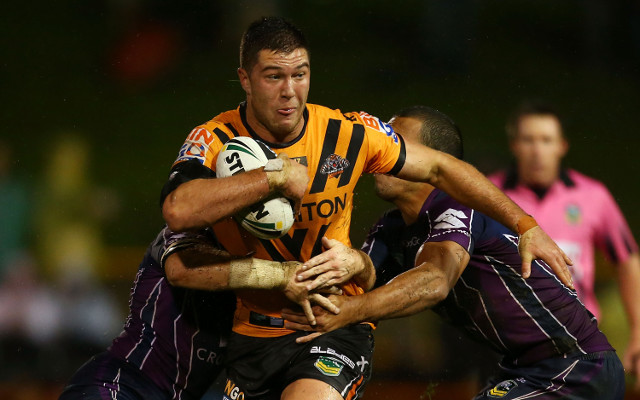 Melbourne continued to make simple mistakes as a forward pass off the back of a scrum with 15 minutes remaining placed the Storm under heavy pressure.

Wests then sealed the win when David Nofoaluma barged his way across the line to give the deserving home side the two competition points.

A late try to Marshall was the cherry on top for the Tigers’ excellent performance after he toed the ball forward to make the final score 22-4.

Despite the win the Tigers remain in second-last place on the ladder but their form is turning around as they prepare to play the Cronulla Sharks at Toyota Stadium in round 17.

The loss sees the Storm slip to be five points behind competition leader South Sydney, with the Storm looking to get back on track next weekend when they host the Brisbane Broncos.