Series locked at 1-1 going to deciding clash in Sydney after epic finale in Melbourne.

The Wallabies have kept their hopes alive of beating the British and Irish Lions after securing a stunning late victory against the tourists 16-15 at Etihad Stadium.

With time running out, Australia surged towards the Lions’ try-line through a sustained build up before Adam Ashley-Cooper became the hero for his side as he crashed over to cut the margin to one.

But the pressure then fell on the young shoulders of Christian Leali’ifano who did not miss a beat to slot the conversion to give his side the lead with only a minute left.

The drama was not over as the Lions earned a penalty 53 metres out from the posts as sharp-shooter Leigh Halfpenny stepped up to see if he could give the Lions the series win.

However, his shot at goal was waved away sparking celebrations from the Wallabies and their fans as they kept the series alive heading to the final game in Sydney.

Ashley-Copper said his side stay composed in the tense final minutes despite being under heavy pressure by their opponents.

“It was important to retain that belief and at six points down we were were let down with out ball retention and they (Lions) were every hard over the ball tonight,” the outside centre said.

“We just needed to hang onto the ball and get some territory we knew we could find points either
through points or shots at goal through penalties.

When asked who has the momentum was with going into the last game Ashley-Cooper’s response was simple: “we do”. 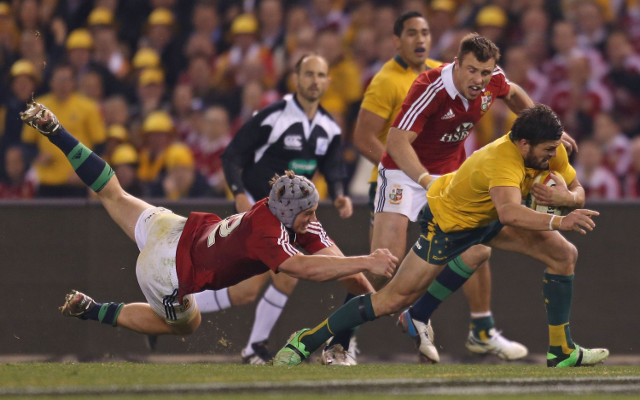 Irish veteran Brian O’Driscoll said his side could not secure possession in the last five minutes which would have seen them wrap up the win.

“We’re very disappointed, we were not in control despite being six points clear but it’s a dangerous margin because a converted try and we can be behind,” O’Driscoll said.

“We gave them chances to build a platform for their last try, I don’t think we’ve been able to build enough phases in the past two games

“But it’s not over we’ve still got next week, we have to get ourselves mentally and physically right, we knew they were could not make it easy and they have not.” 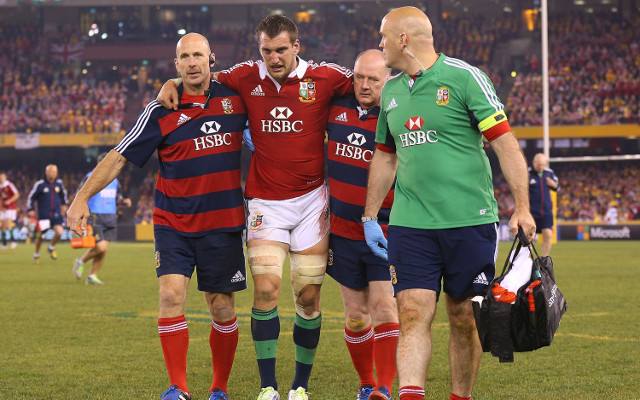 Lions skipper Sam Warburton, who did not finish the game due to a possibly serious hamstring injury, said their opponents showed it was possible to fightback from disappointment, after Kurtley Beale’s miss denied them a chance for victory in the first Test.

“We’re going through what Australia went through last week, we still have a Test series up for grabs so we have to pick ourselves back up.” he said.

“Australia got a hold of us in our 22 and we found it hard to get out and it’s hard to practice for that with the pressure they put on us.

“I felt something in my hammy so I checked some ice on it so I’ll have the physio have a look at it tomorrow,” the skipper said of his injury.

Much of the game was dominated by set-pieces, with penalties from scrums allowing for Leali’ifano and Halfpenny to make their mark in the first half.

The Lions applied pressure at the breakdown early as the Wallabies were penalised for hanging on to the ball, allowing Halfpenny to have a shot from goal 48 metres out.

However, the shot for goal bounced off the cross-bar letting the home side off the hook for their
early indiscretion.

Referee Craig Joubert was quick on the draw for calls against the ball carrier holding on as the Lions applied plenty of pressure.

The Lions looked to use the weapon that is the rolling maul early which they did to good affect,
as the Wallabies gave away penalties as they attempted to spoil the ball.

Halfpenny earned another shot at goal and he did not make any mistakes as he put the Lions in front for the first time after nine minutes. 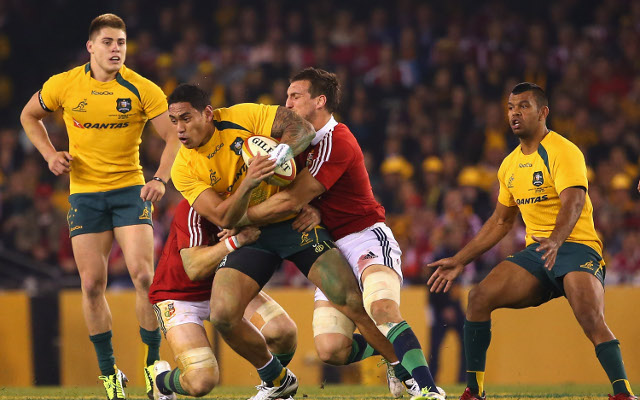 The Wallabies looked to Israel Folau with a play more akin to his time in rugby league, with a cross field kick signalling the home side’s intent.

Australia turned up the pressure up at scrum time as they elected to pack down again off a free-kick with another collapse earning the home side a close-range penalty.

As opposed to the Wallabies’ missed chances early last weekend, Leali’ifano slotted the kick to even the score after 16 minutes.

Errors started to creep into both sides with the Lions failing to make touch off a kick while the Wallabies turned the ball over after a knock-on in the tackle.

Another scrum penalty against the Lions handed a shot on goal as Mako Vunipola continued to get worked over in the front row.

As a result, Leali’ifano put the home side in front for the first time 6-3 with 17 minutes left in the first half.

The Lions scrum then fired back as they earned a turnover and a penalty with Halfpenny kicking his second for the game to once again even the scores. 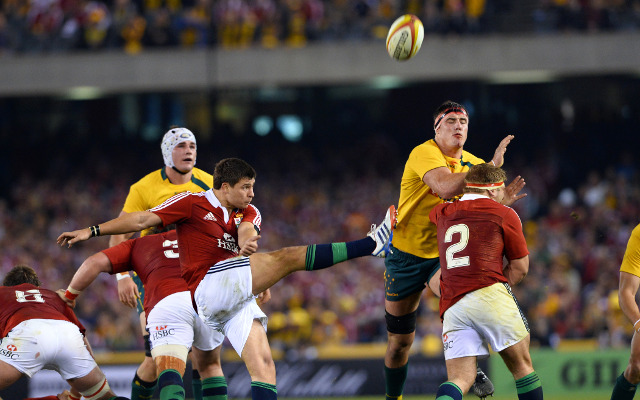 The Lions struggled with the longer throw at the lineout, with one loss and one scrappy possession after half an hour.

Australia’s scrum then came under fire as they gave away a penalty after ti went through 90 degrees, with the metronomic Halfpenny putting the tourists in front 9-6 with eight minutes left before half time.

Ashley Cooper went down hurt after copping an elbow from Vunipola off the ball, but the Wallabies outside centre stayed on the field after some attention from the trainer.

The Lions gifted a simple penalty to the Wallabies for a clear off-side call at the breakdown, seeing Leali’ifano step up to the mark again as he snuck it just inside the right-hand upright to make it 9-9.

The shootout between the kickers continued as the Wallabies were forced to slow the ball down at the breakdown just before half-time as the side in red pushed forward.

And Halfpenny scored his 12th point for the game to see the Lions lead at half-time 12-9.

Warburton was a menace at the breakdown for the Lions in the second half,  as he caused three turnovers for his side after just 50 minutes.

An intercept pass by from Brian O’Driscoll found Folau leading to a strong counter-attack for the Wallabies on as the game continued to open up.

Neither side was able to hang on to the ball for 12 or more possessions thus turning up the pressure, as it seemed more likely that one try could decide the game.

George North then pulled of an amazing show of strength when he carried Folau on his shoulder and used him almost as a battering ram, but the massive winger hurt his neck in the tackle, but managed to stay on the field.

Yet another penalty off a scrum saw Halfpenny step up for the vital first points of the half, with the sharp-shooter sneaking the shot over the bar from 50m out as the Lions’ lead grew to six with 17 minutes left.

The Wallabies began to build in attack as strains of ‘Swing Low Sweet Chariot’ echoed throughout Etihad Stadium.

But again one bad pass or one bad handling error released all of the pressure on the men in red.

The Lions lost Warburton to injury with 14 minutes left in the game as they looked to edged towards
victory with Tom Croft on to replace him.

Folau put the Wallabies on to the front foot as the home side attacked deep inside the Lions’ 22m area, with Australia taking the gutsy option to go for a scrum with less than 10 minutes left.

After several solid lead-up phases the Wallabies eventually got extra numbers on their short-side and a short-pass to Ashley Cooper busted through the gap and crossed to put their side behind by one. 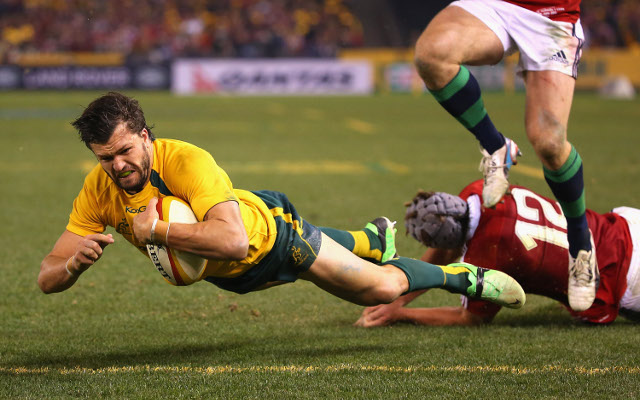 Leali’ifano was given the task of putting his side in front in just his second Test match, as he lined up five metres in from touch and 25 metres out.

But the inside centre made no mistake and stayed cool under pressure as he piloted the ball in down the middle to give the home side a one-point lead at 16-15 with three minutes remaining.

However, the drama did not cease as Genia passed back into his 22m area allowing the Lions a lineout only 10 metres out from the try line.

But again their woes at the lineout continue as Liam Gill earned his side a crucial turnover at the breakdown, with his work eliciting memories of Justin Harrison’s line-out steal of 12 years ago.

The Lions earned a penalty on their own 22m as the siren went for full time before the Wallabies gave away a penalty for not rolling away from the ball giving Halfpenny a chance to steal the win and the series.

With the ball sitting 53m on the angle the shot sailed to the right and was short giving the Wallabies a memorable win and ensuring the series will be alive when it goes to Sydney all locked up.