NRL veteran could be a spectator for the remainder of the year for the Cronulla Sharks.

As if Cronulla’s season couldn’t get any worse, vice-captain Wade Graham’s year could be over.

A meeting on Monday with the Sharks medical staff will determine the recovery process facing the talented backrower after scans on Sunday morning revealed a stress fracture in his foot.

With just five weeks remaining, Graham is aware that Monday’s appointment could spell the end of his 2014 season.

His omission from the Sharks squad, who are desperate to avoid the wooden spoon, would prove a devastating blow in a year to forget for the Sutherland Shire club.

Remarkably, and underlining his fortitude as a leader of the club, Graham produced 30 tackles and 15 runs despite the obvious pain.

The 23-year-old could hardly walk, with a heavy bag of ice strapped to his ankle as he fronted the post-match press conference.

The injury would also prove a significant personal setback. After being identified by NSW State of Origin coach Laurie Daley during this year’s series as a future Blue, Graham would have been a certainty to be chosen for this year’s Prime Minister’s XIII squad to play Papua New Guinea after the grand final.

Also joining Graham in the Sharks casualty ward are Anthony Tupou, Luke Lewis and Jacob Gagan, all of whom suffered hamstring injuries against the Eels. 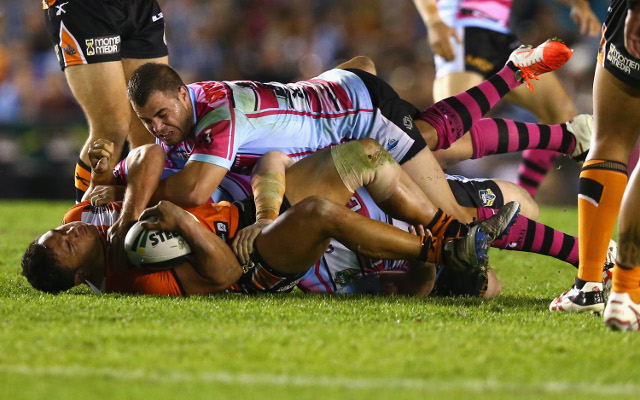 David Nofoaluma cleared of biting Wade Graham by the NRL