Slip reveals that Napoli striker did not vote for Mourinho. 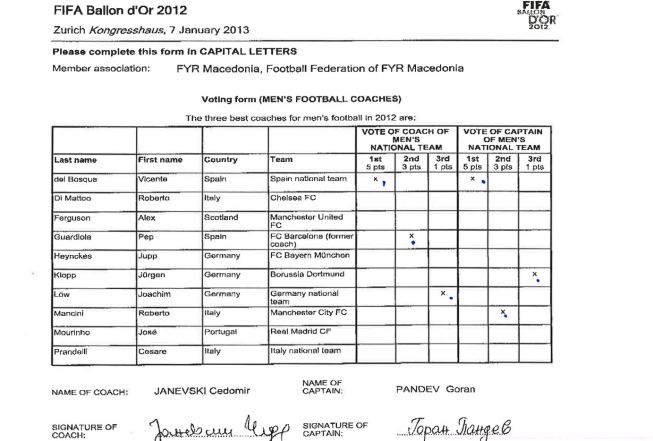 FIFA have released Goran Pandev’s World Coach of the Year voting slip after accusations from both the Macedonia striker and Real Madrid boss Jose Mourinho that there were ‘irregularities’ with the voting process.

The slip, signed by Pandev, revealed the Napoli forward voted for eventual winner Vicente del Bosque of Spain in first place, and Manchester City’s Roberto Mancini and Borussia Dortmund’s Jurgen Klopp in second and third respectively, despite his assertion that he had voted for Mourinho.

The Los Blancos head-coach, 50, suggested earlier in the week that votes were tampered with, claiming: “One, two or three people phoned me to tell me that they had voted for me and later, when the list of votes was published, another name appeared by their votes. That was why I decided not to go to the gala.”

“I’m accusing FIFA of irregularities in the vote for best manager in the world,” he added.

“I called Mourinho and told him I didn’t know what happened.”

Moruinho finished second behind Del Bosque in the standings but refused to attend the gala in Switzerland.

During Pandev’s second spell at Inter Milan, he played under Mourinho, claiming a host of awards including the Serie A title, the UEFA Champions League and the FIFA Club World Cup.

Mourinho guided Real to their first La Liga title since 2008 last season, with the team racking up 100 points and finishing nine points clear of arch-rivals Barcelona.

Ex-Barcelona boss Pep Guardiola finished third in the vote, despite only winning the Copa del Rey in 2012.