World record holder clocks 9.85sec in his return to the English Olympic city.

Olympic champion and world record holder Usain Bolt stormed to victory in the 100m at the London Diamond League meeting on Friday as he returned to his brutal, stunning best.

The Jamaican superstar warmed up for his world championships bid in Moscow next month by sparkling in front of a packed crowd at the London Olympic Stadium.

He won in a season-best 9.85sec despite making a lacklustre start and performed a lap of honour in front of a packed 60,000 crowd.

Returning to the scene of his golden Olympic treble a year ago, the fastest man on earth blew his rivals away with at the Anniversary Games event.

“I love coming here. The fans give you so much energy and this is what makes me run faster,” said Bolt.

“I felt good tonight and I am pleased with the time I did even if I was a little slow off the blocks and I had to play catch up. There is a lot of room for improvement. I am getting there and Moscow is going to be great.” 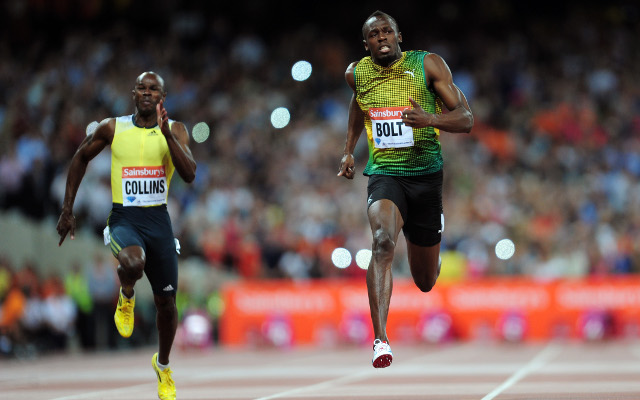 Having been beaten by American Justin Gatlin in Rome earlier this year, Bolt was a man on a mission. And he did not let his worldwide fan club down.

The global audience may have been a fraction of the near one billion armchair supporters who watched in awe last summer but there was still a special atmosphere inside the stadium.

Bolt, who 24 hours earlier spoke openly about his despair at the latest drugs controversy to rock athletics with sprint rivals Tyson Gay and Asafa Powell implicated, had been paraded around the stadium beforehand.

The 26-year-old, six-times Olympic gold medallist stood on a mock fighter jet and held the Jamaican flag aloft, taking the applause of the sun-drenched supporters as he was driven around the stadium.

Weir finished a tenth of a second ahead of another Jamaican, Jason Young in a time of 19.89.

The Grenadian timed his run to perfection to surge through down the straight and win in 44.65.

Poland’s Piotr Malachowski won the men’s discus with his third round throw of 67.35m.

Czech star Zuzana Hejnova set a new season’s best of 53.07 in the women’s 400m hurdles as she powered her way to victory to beat Britain’s Perri Shakes-Drayton for the third time this year.

Shakes-Drayton, who also set a personal best time of 53.67, said: “I gave it everything, and just went for it but it just wasn’t enough.”

American Shannon Rowbury surged to a season’s best of 8:41.46 in the women’s 3000m while Cuban Yarisley Silva proved strongest in the pole vault with a new Diamond League record of 4.83m.

Usain Bolt reveals desire to be ‘greatest sportsman ever’