Cats fail to score in the last quarter but hang on for the win.

Geelong has kept its undefeated start to the AFL season alive after defeating the Western Bulldogs 15.17 (107) to 13.8 (86) at Etihad Stadium.

The Cats had just two rotations available to them after half-time, but they did enough to claim their fifth win of the season.

Geelong lost Jared Rivers to a right knee injury in the first quarter before Josh Caddy was hit by Bulldogs’ rookie Brett Goodes, with the match review panel expected to look at the collision.

The Western Bulldogs looked likely to cause one of the biggest upsets of the season to date, when they kicked three straight goals in the last term to drag the margin back from 35 to just 19. 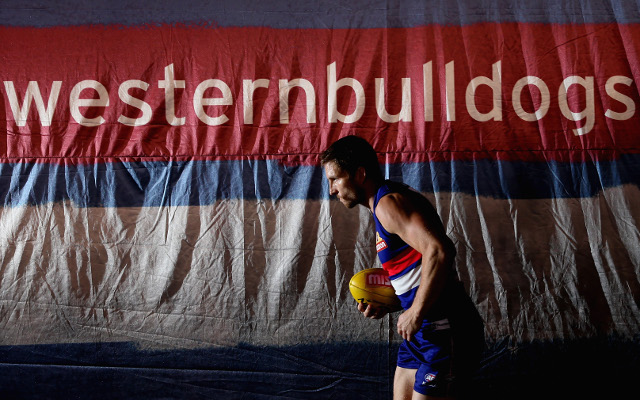 Liam Jones could have put the result well and truly back on the table when he ran into an open goal, but agonisingly his shot was wide of the mark.

Geelong’s midfield again led from the front with Steven Motlop in everything, while Harry Taylor continued his successful move to the forward line, bagging five goals for the victors.

Joel Selwood again showed he is still in a purple patch of form, collecting 21 disposals and two goals in just the third term as he looked to try and inspire his sided.

Geelong still have big challenges ahead of them as they look to take on Richmond and Essendon in the next fortnight.

The Western Bulldogs had plenty of positives to take out of the match against the Cats in spire of the loss, and they will look to build towards their second win of the year, when they travel west to take on the Eagles in round six.

Check out some of the highlights of the clash below: