South Africa proved too strong for Scotland at St James’ Park this evening, recording a 34-16 victory which leaves Vern Cotter’s side unsure of their Rugby World Cup 2015 future.

The Springboks ran in three tries, including this late effort from Bryan Habana, but it was the 19 points from Handre Pollard’s boot which inspired the two-time champions to a crucial win.

South Africa were 20-3 up at the break, with Greg Laidlaw’s penalty the only score that Scotland could get on the board in reply to Bismarck du Plessis and JP Pietersen tries.

They reduced the deficit to 20-13 early in the second half, with Tommy Seymour crossing after a Duncan Weir interception, but Heyneke Meyer’s side rallied and took the game away from the Scots, and Habana’s 61st international try sealed them a comfortable victory seven minutes from time.

Pool B is now finely poised with one game remaining for each of the teams still in contention to qualify for the last eight. South Africa are top, with Scotland in second and Japan in third.

Japan’s 25-6 victory over Samoa this afternoon has kept alive their quarter-final dreams, and they, along with the Springboks, have United States, yet to win a point, left to play.

Scotland have the tougher task of three-time quarter-finalists Samoa in their final group match, although they know that victory would guarantee them progress to the knockout stages. 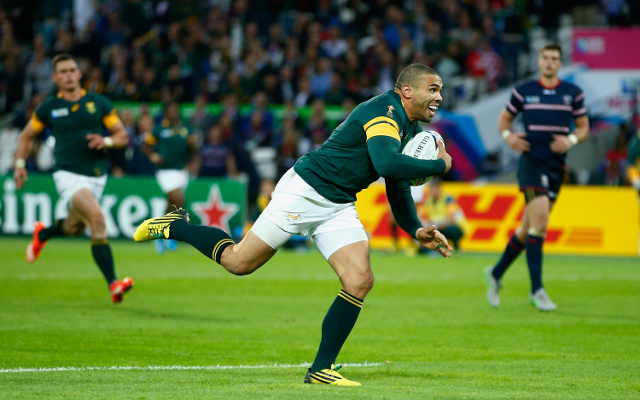