Ron Hunter saw his son nail a game-winning shot to clinch a dramatic upset on Thursday, but the Georgia State coach was left red-faced as he was captured falling off his stool in the celebrations.

Hunter had to use the stool after he tore his Achilles celebrating Georgia State’s tournament bid-clinching victory last weekend, but he wasn’t done celebrating and risking his health further as the emotions took over again.

When RJ Hunter knocked down the shot to seal a sensational upset win over third-seed Baylor, his father took a tumble off his stool in the excitement.

While Hunter can be forgiven for being over-zealous given the circumstances, that didn’t prevent him from becoming an instant hit on the internet with memes and jokes coming from all angles.

From Jameis Winston’s playoff flop to ‘Life Alert’ ads to former Indiana Pacers star Lance Stephenson blowing him over, Hunter was certainly in the spotlight on Thursday night.

However, having just witnessed your son hit a game-winning shot in such a big game would probably have many fathers falling over themselves in celebration. Just take it a bit easier next time Ron… 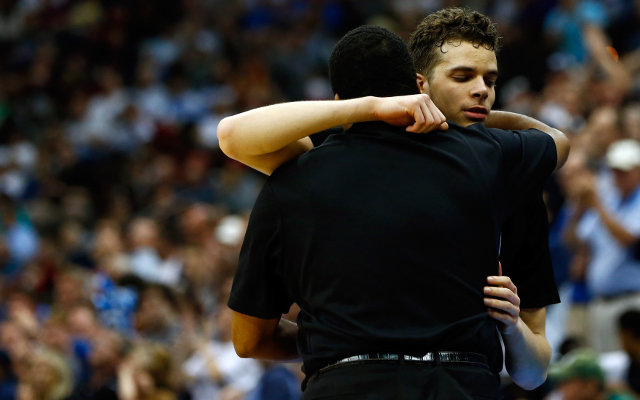