Point guard Jrue Holiday heads in the opposite direction.

After the disappointment of slipping to No.6 in the NBA Draft 2013, Nerlens Noel has been traded to the Philadelphia 76ers by the New Orleans Pelicans, according to ESPN sources.

The 6-foot-10 center had been tipped to be picked up by the Cleveland Cavaliers with the first pick on Thursday night, but that wasn’t the case as he fell outside of the top five.

Nevertheless, he has been handed a big opportunity in Philadelphia, who have agreed to let point guard Jrue Holiday depart, with a 2013 unprotected first-round pick also included in the deal for the 76ers.

Noel is unlikely to feature when the new season starts, as he continues his rehabilitation work from a torn ACL he suffered back in February.

He averaged 10.5 points and 9.5 rebounds with 106 blocked shots as a freshman, but understands that he will have to work hard when he arrives in Philly.

“They’ve got a great organization there, too. I’m just staying positive about everything,” he said. “It shows how much confidence they have in me. I’m just looking to get down there and work hard,” he told reporters as quoted by ESPN.

Holiday, a former All-Star, averaged 17.7 points and eight assists for the 76ers last season, and will now hope to build on those numbers when he moves to New Orleans.

The move allows the 76ers to clear his $41m contract off the books, giving them plenty of cap space to reshape the team after a bitterly disappointing campaign last year.

Nevertheless, it is a great opportunity for Noel who will be determined to overcome the disappointment of seeing his stock fall on Draft night and make an impact in his rookie year when he is fully healthy. 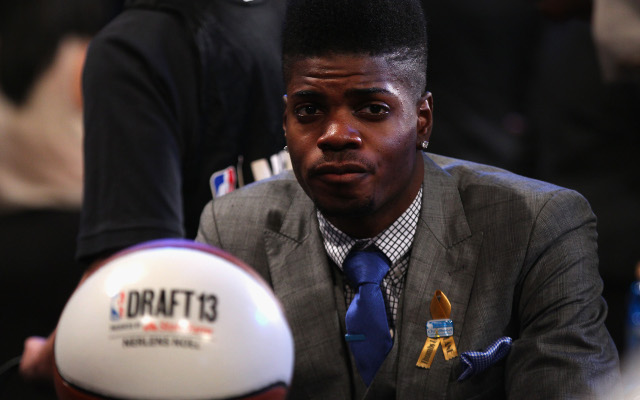 (Video) Nerlens Noel speaks out after falling in the NBA draft