Week of intense scrutiny on the club fails to distract James Hird’s side.

Essendon capped an emotional week with a stirring second half comeback to defeat the Fremantle Dockers on the road at Pattersons Stadium by four points.

With the club being embroiled further in the Australian Sports Anti-Doping Authority (ASADA) probe, the Bombers overcame a 36-point deficit at half-time to defeat Fremantle 10-12 (72) to 9.14 (68).

Allegations this week were levelled at Essendon coach James Hird that he knew about the club’s allegedly suspect supplement regime and that he was injected by disgraced sports scientist Stephen Dank.

Despite the hysteria surrounding the side, Essendon simply fought harder for possession in the second half as they turned around a miserable few days, with the emotion of the victory written across the players’ faces at full-time. 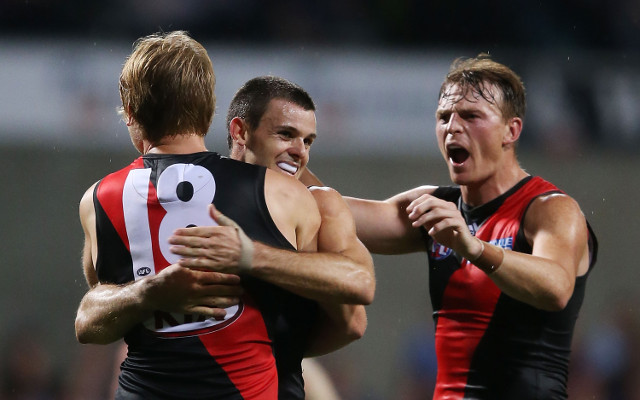 Bombers captain Jobe Watson said it was a tough preparation given the off-field dramas currently enveloping the club.

“It hasn’t been a pleasant time at the club and then playing poorly through the first half, we just fought that’s all it was, but I couldn’t be prouder of the team,” Watson said.

“I don’t think it (ASADA probe) affected us how we played, it maybe affected us more of an emotional level because Hirdy (coach James Hird) is a mate for all of us, but this is a great win.”

The drama also spilled onto the field with Fremantle still having a chance to snatch the win out from under the Bombers’ noses.
After Patrick Ryder kicked around hid body to score a goal with just two minutes remaining, the ball then became bogged in the Fremantle forward 50.
Chris Mayne had the chance to be the hero for the home side, but he rushed his shot and it helplessly stuck the post, as he slumped to the ground upon realising he ruined his side’s last chance at victory.

Fremantle’s Luke McPharlin went off early in the first quarter after copping a high hit from Pat Ryder, which saw him subbed out of the game after he failed the concussion test

The first score took eight minutes to arrive when Mayne slotted a behind for Fremantle as the Dockers made the most of the slippery conditions and pressed forward.

Fremantle’s 11th inside 50 of the opening term led to Hayden Ballantyne goaling and Michael Walters scored Fremantle’s second when he dribbled it through from beyond 50 as the home side led by 30 at the first break.

David Zaharaksi summed up Essendon’s fortunes in the first quarter when his shot after the siren hit the behind post.

Paul Duffield was busy for Fremantle in the first quarter in collecting nine disposals
while also kicking a goal, while Cale Hooker led the way for Essendon with eight.

Essendon’s Stewart Cameri finally kicked his side’s first goal nine minutes into the second quarter to cut the margin to 23.

However, it was still Fremantle’s game to lose at the long break.

Essendon then fired out of the blocks in the third term, kicking 5.5 compared to just two points for the home side to set up the grandstand finish.

Dyson Heppell gave the bombers a 10-point lead in the last quarter as the last seven goals all went to the Bombers.

Michael Walters goaled for Fremantle when he played on quickly to score his side’s first goal in 51 minutes, cutting the deficit to four.

The tough battle for the football resumed and led to the Bombers scraping through to one of the club’s best wins, given the circumstances still surrounding the side.

The win was soured for the Bombers when Michael Hurley was assisted from the ground after full-time with what looked to be a serious shoulder injury.

Check out the emotional version of the Bombers’ club song: