Nathan Buckley gets one up over her former mentor after Carlton defeated at the MCG.

All of the talk leading up to the second round blockbuster betwee Collingwood and Carlton was the apparent showdown between Nathan Buckley and Mick Malthouse.

Once player and coach and later coach and mentor, now adversaries.

However, it was the skills of both sides of small forwards that shone in front of 84,247 at the MCG, with Jamie Elliott starring to kick five goals and spark a come-from-behind Magpies victory.

“All of the boys played their role and I couldn’t ask for anything more from them,” an overjoyed Elliot said after the final siren.

Malthouse said Collingwood’s big guns stood up when it mattered most in the fourth quarter and showed their class.

“Their good players got on top and that was disappointing,” Malthouse said.

“But I know we can match it for periods of time with one of the league’s best sides, that’s encouraging.

“They were better when it counted most. They were smarter and they out-worked us.” 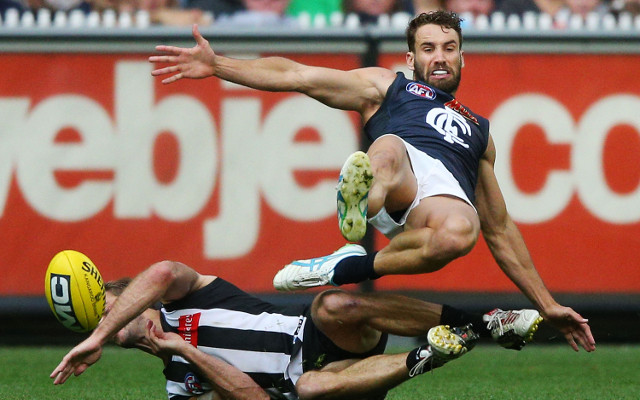 The complexion of the Magpies’ structure changed dramatically when ruckman Darren Jolly left the field in the first quarter with what turned out to be cracked ribs.

Quinten Lynch then became a focal point for the Magpies, and he responded, particularly in the final term as he racked up 24 possessions and 19 hit-outs.

Andrew Walker capitalised on a cheap turnover by Collingwood to kick the first goal for the Blues and bagged his hat-trick for the term when he dribbled it across the line from 45m out.

Elliott nabbed the first goal for the Pies after a good mark, as the rain that caused controversy at Etihad Stadium also hit the MCG.

Jarryd Blair broke clear from the pack to run into the square to give Collingwood the lead 21-18 to Collingwood at first quarter break.

Jolly came back on the field for Collingwood to start the second term, despite the apparent seriousness of the injury, but he was subbed out soon after despite the brave effort of playing on.

Carlton dominated possession but they have not been able to capitalise on the ball with just three behinds early in the second term with Chris Judd racking up five contested possessions early.

The game is turned into a heavyweight battle as both sides slugged it out across the field as Chris Yarran crumbed well from a contest for Carlton to put their noses in front again.

The tit-for-tat goal scoring continued as O’Dwyer again putting the Magpies in the lead.

Yarran took a spectacular mark to goal, signalling all six team majors have come from their
small forwards as Kade Simpson also got on the board for the Blues who led by 10 at the long break.

Elliott continued to be busy after the break to score after being set up by Dane Swan, who looked to make up for his quiet first half.

Walker missed chance to kick his fourth goal for the Blues, but Tom Bell burst through a pack to run into an open goal as the Blues took an 11-point lead.

Collingwood started to lose their nerve at ground level in defence, with Yarran kicking truly after earning a free to give the Blues the biggest lead of the game at 18. 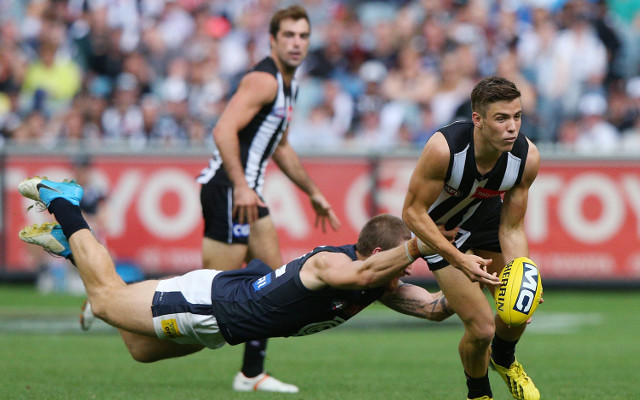 Collingwood then hit back to score the next four shots, including a goals by Martin Clarke and Heath Shaw and the margin shrunk to just three.

Travis Cloke was held well by Michael Jamieson through first three quarters with the Pies forward
failing to kick a goal, but worked hard off the ball.

Brock McLean subbed on for Jeremy Laidler and looked to provide run for the Blues through
the middle of the field as Ben Sinclair scored the first major for the last term and the Pies were back whithin six points.

Collingwood began to apply heavy pressure to the Carlton ball carriers forcing them to rush their decision making, and as a result, Elliot bagged his fourth.

Jeff Garlett steadied the ship for Carlton with a sensational goal when he snapped from beyond the 50 metre mark from the left front-pocket, as they drew the deficit to just five.

Swan landed a body blow against his former coach with a goal with 10 minutes remaining to continue his big last term.

Collingwood did well in the closing stages in clogging the lanes to goal for the Blues, who were unable to make the most of the possession in their half of the field.

Lachie Henderson goaled for the Blues with just five minutes remaining, setting the game up for a grandstand finish.

But goals to Steele Sidebottom and Scott Pendlebury sealed the remarkable come-from-behind win for the Pies.

Check out the highlights of the blockbuster clash below: