England king of swing proves why he is the best Test fast bowler in the world.

James Anderson insisted he was prepared for more hard work in pursuit of Ashes glory after leading England to a nail-biting 14-run win over Australia in the first Test at Trent Bridge.

Anderson bowled 13 unchanged overs in Sunday’s morning session, taking three for 29 on his way to innings figures of five for 73 and a match return of 10 for 158 as Ashes-holders England went 1-0 up in this five-match series.

But a last-wicket stand of 65 between Brad Haddin (71) and James Pattinson (25 not out) took them to the brink of a sensational win. 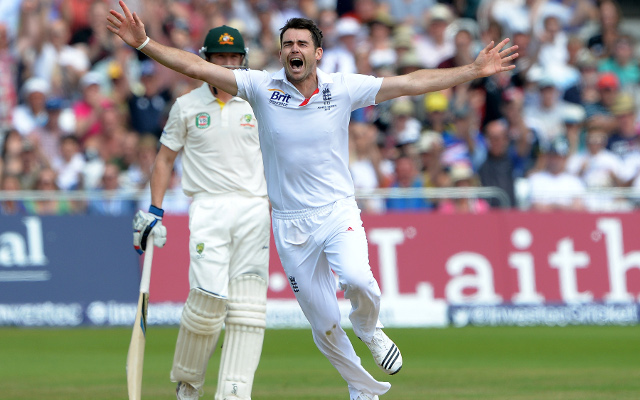 It was no surprise when England captain Alastair Cook turned to Anderson after lunch.

And the 30-year-old Lancashire seamer duly obliged, albeit with the aid of the controversial Decision Review System (DRS), to have Haddin caught behind by opposing wicketkeeper Matt Prior after England successfully challenged Pakistani umpire Aleem Dar’s original not out verdict.

Anderson’s match figures were his best in Test cricket since he took 11 for 71 against Pakistan at Trent Bridge in 2010.

“I had the nerves going a little bit but I love bowling here, it’s been good to me over the years and I’m happy that I could pick up some more wickets,” said Anderson, who has now taken 49 wickets in seven Trent Bridge Tests.

Anderson, long the linchpin of England’s attack, admitted that maintaining a workload similar to Sunday’s stint across an entire series would be tough.

“If I’m bowling 13-over spells it’s going to be difficult!

“But it’s Ashes cricket…That’s why we do the hard work in the gym — to get out there and bowl long spells.

“As soon as I got the ball I felt in control and I wasn’t nervous because I knew what I was doing and I knew I could get that final wicket,” added Anderson, whose first three wickets on Sunday, all came via catches by Cook at first slip.

“We knew it was going to be difficult this morning, their tail is very strong so we knew we had to bowl well. But I found some rhythm this (Sunday) morning which the captain cottoned on to and gave me 13 overs so I’m just delighted.” 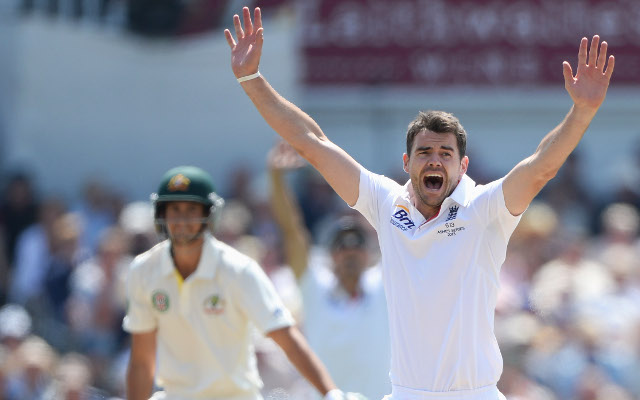 Cook praised Anderson’s stamina, as well as his expertise.

“We know all about Jimmy’s skill but his heart to keep running in on a hot day on a flat wicket was outstanding,” said Cook.

“He swings it both ways on an immaculate length and makes it very hard to score. When a bowler hits a rhythm you just keep asking him if he’s feeling alright,” the opening batsman added.

Meanwhile, with the second Test at Lord’s starting on Thursday, England great Ian Botham urged Anderson, a bowler he compared to his old New Zealand adversary Richard Hadlee, be “wrapped up in cotton wool”.

“He deserved to pick up that last wicket. I remember those dark days when the coaches decided to change his action — it was ridiculous.

“The guy is a natural bowler and it’s all his own action. He’s worked hard on it,” added Botham, who like Anderson is one of only four England cricketers to have taken 300 Test wickets.

Former England captain Botham, who reserved many of his best all-round performances for Australia, added: “He used to just want to be the quickest bowler in town, he’s curbed that like Richard Hadlee and learned his skills and now bowls within himself. He has great control and that doesn’t just happen.

“He’s just terrific and I think England need to wrap him up in cotton wool, he needs to sit and do nothing and slowly wind up for the next Test on Thursday. Let him rest!

“He’s just a magnificent bowler and goodness knows what will happen if he gets injured.”