We rate the five best out-of-contract players in the league ahead of the AFL Trade Period. 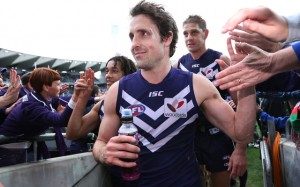 McPharlin has had his fair share of injury issues, but there is no doubting his quality.

There were strong rumours circling that the defender was likely to retire, but coach Ross Lyon says he is “more likely than not likely” to play on.

If he does play on however, it seems he is unlikely to leave the Dockers.