World number one Tiger Woods, seeking his eighth career victory at the World Golf Championships Bridgestone Invitational, fired a two-under par 68 on Saturday to keep a seven-stroke lead after 54 holes.

One day after matching the low round of his career and the Firestone Country Club course record with a 61, Woods maintained the same gap he had opened on the field on Friday, with a three-round total of 15-under par 195.

“I feel pretty good,” Woods said. “Today was a day that I didn’t quite have it, but I scored. And the name of the game is posting a number and I did, grinded my way around that golf course.”

Woods, a 14-time major champion chasing the all-time record of 18 majors won by Jack Nicklaus, is in a commanding position to claim his fifth victory of the season and has sent a message that he is in top form entering next week’s PGA Championship, the final major event of the year.

“Any time you can go into a major tournament or any tournament with a win under your belt, it’s nice,” Woods said. “It validates what you’re working on and you have some nice momentum going in there. And hopefully I can seal the deal tomorrow and get ready for the PGA at Oak Hill.”

Sweden’s Henrik Stenson fired a 67 to stand second on 202, one stroke in front of American Jason Dufner, who also shot 67 on Saturday.

“All in all, to-under par is not too bad,” Woods said. “I birdied the first two right out of the gate and I figured if I could somehow just keep the card clean and not make any bogeys and maybe throw a couple more in there, it would be a pretty good day.”

Woods is 52-4 when leading or sharing the 54-hole lead in a tournament. He has won nine times in PGA events by eight or more shots and his current lead in the largest in a PGA event since Rory McIlroy led by eight after three rounds of the 2011 US Open. 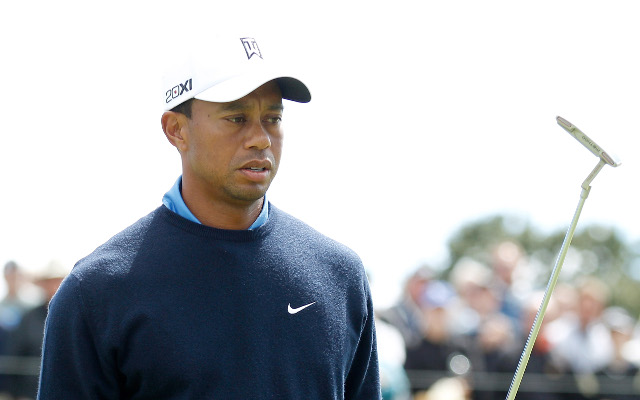 Tiger Woods hit with two-shot penalty for moving his ball