World number one accidentally doubles his score on the first hole at the BMW Championship.

Tiger Woods was having a pretty decent day until rules officials informed him after his second round was over that they were slapping him with a two-stroke penalty.

World number one Woods managed a one-over 72 in the second round of the BMW Championship to end in a share of 13th at four-under 138.

But that included being hit with a two-shot penalty on the first hole, when he tried to move a tiny stick that also slightly shifted his golf ball. That changed his double bogey to a quadruple bogey.

Rules officials said they were alerted to the infraction by a PGA Tour videographer.

The penalty leaves Woods in a group that was seven shots off the lead heading into Saturday’s third round.

Woods said he thought the ball had only oscillated in place but officials ruled otherwise. The incident took place before he hit his third shot at the 363-yard, par-four hole.

The rules violation occurred after Woods hit his second shot over the green and onto some dirt and branches under a cluster of trees.

“He had a pretty large loose impediment behind his ball, which he moved, was no problem at all, and there was a little stick of some sort kind of obviously next to his ball, and when he rolled that, the ball in fact moved,” said Slugger White, the vice president of rules and competition.

“He knew there was movement there, but it’s like (he) was very adamant that it oscillated, it stayed there.

“But this video was at the site, and the ball did, in fact, move.” 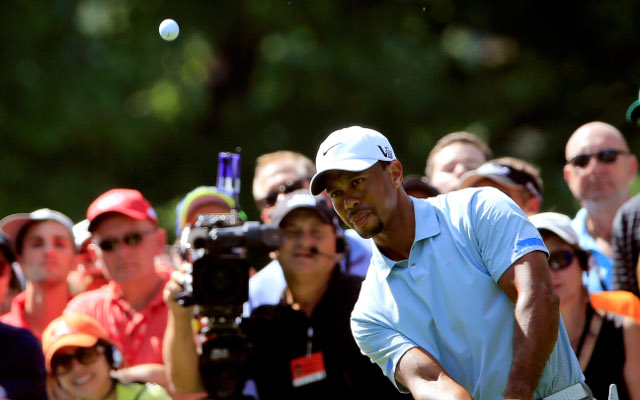