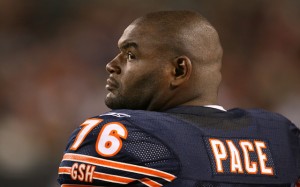 CHICAGO – AUGUST 22: Orlando Pace #76 of the Chicago Bears watches from the sidelines as his teammates take on the New York Giants during a pre-season game on August 22, 2009 at Soldier Field in Chicago, Illinois. The Bears defeated the Giants 17-3. (Photo by Jonathan Daniel/Getty Images)