St Kilda player Sam Fisher has denied media reports during the off-season that declared he is suffering from ‘off-field issues’.

The defender was accused of antagonising teammates, being a bad influence on the squad and some reports claimed he would be kicked out of the leadership group.

Fisher denies the claims and says he was disappointed and hurt by the comments printed in The Age article.

“The accusation, or the comments, made in a certain paper were disappointing and I was a little bit hurt by them,” he told news.com.au.

Fisher spent the off-season overseas in the USA where he attended the weddings of three former teammates before returning to Australia ahead of the Saints pre-season training in Colorado.

The ten-year veteran admits he consumed more alcohol during that period than any previous pre-season but was shocked by the insinuations that he was taking drugs.

While Fisher may not lose sleep over the controversy he was upset that his parents had to read about the allegations and the questions that arose from such suggestions.

“The parents…that’s the most disappointing thing about it,” he said. “They’ve got to read it and then you get asked questions by them.

Playing his 200th game this season, the Saints veteran is no longer part of the St Kilda leadership group but maintains that was of his own decision. While no longer in a leadership position he is still in the mentoring group alongside Lenny Hayes, Justin Koschitzke and Adam Schneider.

Contracted until the end of 2014, Fisher is hoping to extend his contract until 2015 and is looking forward to the season ahead this year.

“I’m proud and privileged of what I have been able to achieve in the game so far.

“I still have things to learn and improve on, and I want dedicate myself as much as I can to the footy club over the next couple of years.” 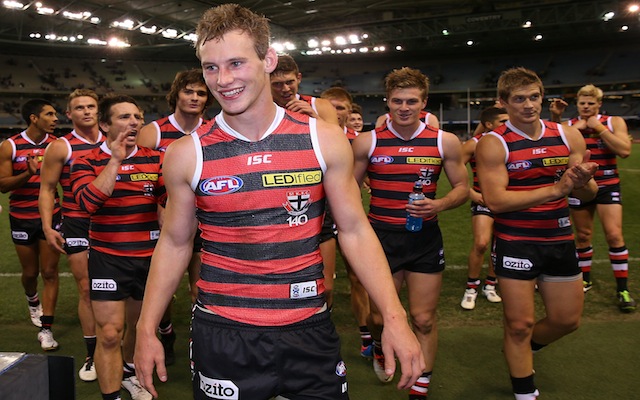