St Kilda earned just their second win of the AFL season after holding off a fast finishing Carlton Blues side by nine points at Etihad Stadium.

The Saints should have won by plenty more as a horror injury toll struck the Blues early, with their decision to start three talls coming back to bite them hard.

Carlton lost Chris Yarran and David Ellard in the opening quarter both to hamstring strains, and Marc Murphy was hobbled by a foot injury.

Nick Riewoldt scored the first goal of the game for St Kilda to continue his personal red-hot form to start the season.

Running off half-back Andrew Walker booted one of the goals of the year from beyond fifty, with the accurate strike lifting the Blues.

Michael Jamieson went off early with a shoulder injury only to return later in the first quarter, but was less than 100 per cent but he managed to battle on bravely for the rest of the game.

St Kilda dominated possession for much of the first quarter but were not able to get inside forward fifty efficiently to turn the touches into points.

Ahmed Saad kicked the Saints third for the term to finally give them the ascendancy on the scoreboard to match their statistical advantage as the Saints’ lead was just seven at quarter time.

Two quick goals to Stephen Milne and Riewoldt blew the margin out as the injuries started to take their toll on the Blues.

Carlton failed to exert the pressure on the Saints coming out of their own half, that they have against other opponents in recent weeks.

Riewoldt’s third for the first half was enough to give his side a handy buffer of 25 at the long break as the Saints looked to go on with the job.

Carlton was unable to make any inroads into the deficit in the third term as they trail by 33 points, a margin they had never overcome in one quarter to win in the club’s history.

But somebody forgot to tell the Blues that. 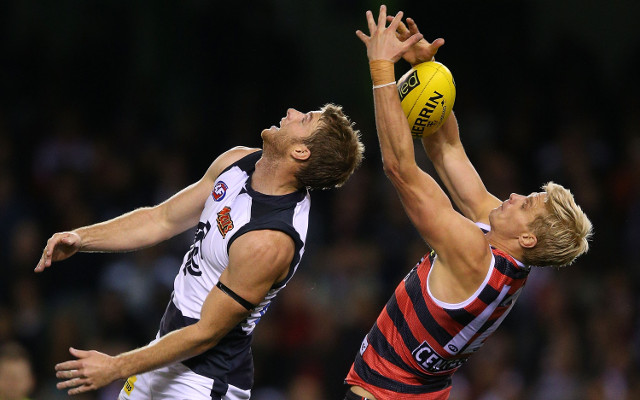 Carlton kicked the first three goals of the last term through Lachie Henderson to narrow the gap to just 15, as the Blues charged towards an unlikely victory.

Jeff Garlett continued his excellent form to start the season by kicking the Blues’ fourth for the term as they made the St Kilda lead just 10.

Henderson proved to be an excellent target up forward for the Blues in the last term and bagged his third for the game as he thread the needle from the front right pocket with the gap down to just four.

Rob Warnock continued to earn Carlton good clearances out of the middle, however, Saad scored against the flow of the game after a patient build-up to give them an important 10-point margin.

Ferocious forward pressure by the Blues as they desperately sought a mistake close to their forward
fifty so they might give themselves one last throw of the dice.

But despite outscoring the Saints by five goals to one in the last term, the Blues came up agonisingly short, as St Kilda won just their second game of the year.