Could Angel Di Maria be heading to the Emirates this summer…? 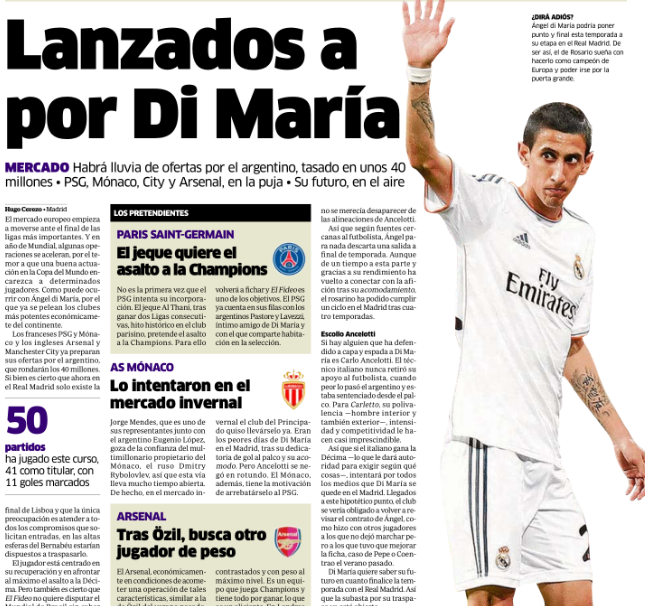 The report (shown above) claims that either of the European giants will need to stump up as much as €40m for the Argentine’s signature.

This term, the 26-year-old has performed superbly in a number of positions for Real Madrid. Di Maria is naturally an attacking left or right winger, but because of the mouthwatering attacking trio of Cristiano Ronaldo, Gareth Bale and Karim Benzema, Di Maria has predominantly been deployed as a central midfielder.

Sat alongside Luka Madric and Xabi Alonso, Di Maria’s done this job excellently, providing strong defensive cover up and down the left side of the trio, while getting forward and using his offensive ability as well.

No other player in European football has assisted more league goals than Di Maria (15), who has also assisted five times in the Champions League as well. On top of the goals he’s created, he’s bagged eight in all competitions too – and is expected to be one of the first names on the team sheet for Carlo Ancelotti’s Champions League final XI as a result.

Despite his excellent form, the reports claims that Di Maria is discontent with the fact he can’t get in the side in his favoured position, and is equally unhappy that he hasn’t been offered a new contract.

If Arsenal want to sign the South American though, they will have to battle two of the world’s richest clubs for his signature. PSG and Monaco proved last summer that they are happy to spend enormous amounts of money – but the Gunners also showed with their capture of Mesut Ozil that they’re willing to break the bank for the world’s very best players as well.

Di Maria would provide the Arsenal side with pace, goals and assists. He would naturally fit in on the left of a front three, in the position Lukas Podolski is currently deployed. Di Maria’s dribbling and speed in behind would maximise the effective of Mesut Ozil in the no.10 position, who enjoys sending his wingers to the byline. With Theo Walcott fit again and starting from the right – the Gunners could have one of the fastest and most dynamic attacking forces in the Premier League if they do sign Di Maria.