Competition newcomers Southern Kings fought back with a try three minutes after the fulltime siren to draw 28-28 with Super 15 front runners ACT Brumbies in Canberra.

Number eight Cornell du Preez plunged over for his second try to cap a fighting comeback from the Port Elizabeth-based Kings to deny the Brumbies a victory in a spirited backs-to-the-wall performance.

The Kings capitalised on a out-of-sorts Brumbies to outscore the competition leaders four tries to two with only Christian Lealiifano’s goalkicking keeping the Brumbies ahead into the final moments.

The Kings’ committed defence frustrated the Brumbies, who dominated the rucks and mauls 110-59 and possession 62-38 percent, but could not break free of the indomitable South Africans after leading 13-0 in the opening 17 minutes.

The Southern Kings now have one win and one tie from the first six games of their debut season.

The Kings also played a man down for much of the closing period with Ferreira in the sin bin for repeated infringements in the 67th minutes. The South Africans conceded 16 penalties to 10 for the home side.

The Brumbies looked set for a big win after early tries to winger Henry Speight and Joe Tomane and Christian Lealiifano impressing Wallabies’ coach Robbie Deans watching from the stands with his inventive showing at flyhalf. 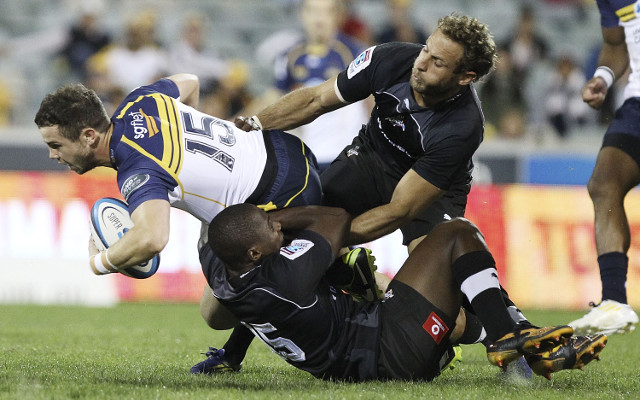 “We are a team who pride ourselves in our defence and fronting up to whoever we play against,” Kings captain Andries Strauss said.

“We were a bit disappointed at the start of the game, we gave away too many penalties and we allowed the Brumbies to play in our half.

“But all credit to the boys, they fought back in the last 10 minutes and we go out with a few points.”

Apart from the two points from the draw the Kings also picked up a bonus point for scoring four tries, while the Brumbies only added two points to their tally.

“Our mindset wasn’t right from the start, we got a good start and then we turned off,” Brumbies skipper Ben Mowen said.

“Inconsistency has cost us but certainly it was a very spirited Kings’ outfit and they threw everything at us and the result shows that.”

The Kings continue their Australasian tour against the Rebels in Melbourne next weekend, while the Brumbies play the Otago Highlanders in Dunedin.