Four tries to South Sydney superstar fullback Greg Inglis has propelled the Rabbtiohs to a huge 44-point win against an injury-ravaged Wests Tigers side.

Inglis out an exclamation point at the end of the vote which recently said he was the best player in the game with an outstanding performance.

But his four tries not the only talking point from the side’s 54-10 win at ANZ Stadium, with John Sutton and Adam Reynolds in the halves, both outstanding.

Wests Tigers coach Mick Potter controversially opted to start star Benji Marshall from the bench in a bid to shake up his side after winning just two games this NRL season.

But the move backfired early as the Tigers conceded more than a point a minute through the first half an hour to see most of the damage done by half-time.

Inglis said he was simply the benefactor of the good lead-up work by the side’s forward and Reynolds and Sutton.

“The big boys ddid the work through the middle and at at fullback it just did what I needed to do and pop up in support,” Inglis said.

“We’ve just had four great weeks, but we need to pick it up again and we have another big game next weekend.”

South Sydney opened the scoring through Nathan Merritt, who showed why he is in consideration
for New South Wales, with an superb finishing display with Reynolds just missing the conversion.

The four-pointer now puts Merritt only four tries behind the club record of 144.

South Sydney looked dangerous when they attacked the left-edge defence of the Tigers with the Rabbtiohs earning easy metres up field.

Bryson Goodwin burst through the middle of some soft Tigers’ defence to set up debutant Dylan Walker as the score grew to 10-0 after just 11 minutes.

The Rabbtiohs scored off the next set they had as Issac Luke burst through some terrible defence to set up Greg Inglis as the game quickly turned into a rout.

Wests Tigers decision to bench Marshall came came to haunt his side, however,  the playmaker would not have ben able to improve their terrible defence. 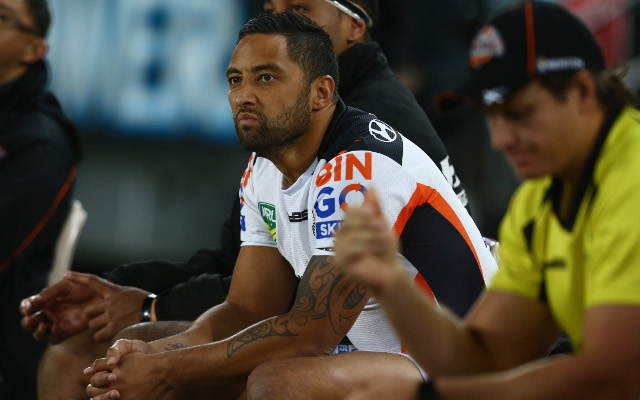 Marshall came on after 17 minutes and with his side 16 points down but Beau Champion soon made the most of a Tigers’ defender rushing up out of the line as the home side continued to pile on the punishment.

Sam Burgess started and finished off another run as the Tigers were simply being cut to pieces in a rugby league landslide.

The Wests Tigers defence continued to be terrible as missed tackles led to a multitude of
linebreaks.

Inglis scored his second for the game after running 100 metres after cleaning up a Tigers mistake to make the score an amazing 38-0 with four minutes left before the break.

Marika Koroibete gave the Tigers something small to smile about as he scored in the corner after running over the top of Merritt.

Mercifully the siren sounded for half time as South Sydney led 38-4 having scored seven tries
already.

The Tigers showed a much better intent to start the second half, and off the back of  two penalties, the joint-venture side looked to have scored.

However, the decision was overturned when interference was found in the lead up to Curtis Sironen scoring. 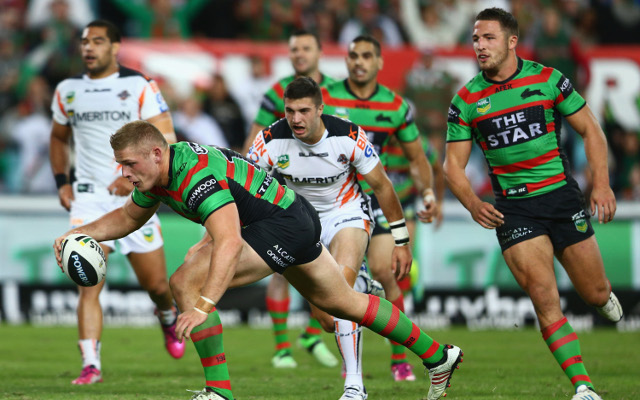 Adam Reynolds continued the pair for the Wests Tigers as he snuck through the middle yet again
to race 50 metres to score next to the posts to make it 44-4.

Wests Tigers have looked a much improved side in the second half but the sheer number of first-choice players out due to injury means they were simply not able to gain any ground back on the side.

Sutton set up Inglis for his hat-trick and his 108th career try, as the Rabbtiohs cracked the half-century mark to make it 50-4.

Sutton continued to be outstanding for the Rabbtiohs as he directed the play well and kept the Rabbtiohs attacking directly at the softer errors of the Tigers’ defence.

Liam Fulton picked up a consolation try after burrowing over from dummy-half and showed great strength to get the ball down despite the attention of four defenders.

Sironen added the extras and made the overall score 50-10, but the Rabbitohs only won the second half 16-6 in a sign the inexperienced Tigers did not throw in the towel.

Inglis made it four for the night off the back of a clever kick by Adam Reynolds to complete the 44-point rout as the Rabbtiohs showed why they are the team to beat this season in the NRL.