Montenegrin unlikely to move to Turin as Llorente is unveiled.

Juventus director Beppe Marotta has revealed that the club are likely to sign Angelo Ogbonna in the near future, but may have to cool their interest in Stevan Jovetic.

Marotta was speaking at a press conference to official unveil new signing Fernando Llorente, and was naturally asked about the situation regarding the club’s other transfer targets.

Torino defender Ogbonna has admirers across Europe, with AC Milan and Manchester United amongst those interested.

However, it would appear that he is set for the short trip across Turin to the Bianconeri, who continue to strengthen ahead of the new season.

It may not be quite as simple to sign Fiorentina striker Stevan Jovetic though, as Moratta admitted that negotiations between the two clubs are difficult given their dislike for one another. 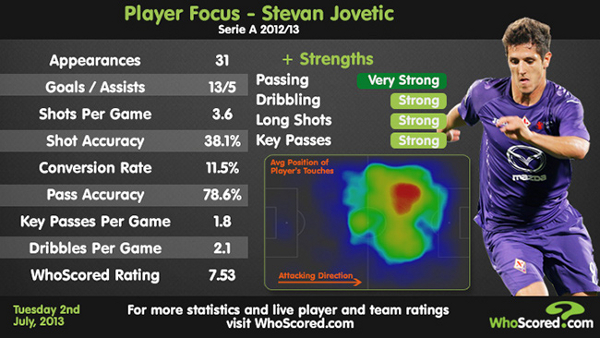 He cited “difficult relations” with the Viola while also stating his belief that the current options available to boss Antonio Conte are more than enough for the season ahead.

“With the arrival of Llorente and Carlos Tevez we have brought in two fantastic players and feel that we do not need more reinforcements in attack,” said Marotta to the media according to football-italia.net.

“Jovetic? He was an option we went after during the summer, but due to difficult relations with Fiorentina I think at this point we are fine as we are. We’re satisfied with our signings.

“Could we open up talks again? Anything could happen from now until August 31, as in the transfer market things change from one day to the next. Who knows, maybe by the end of August Fiorentina will be offering him to us for a free loan…” he concluded.

Fiorentina have refused to lower their €30m asking price for the Montenegrin international, and Juventus’ withdrawal from the race to sign him opens up the door for a potential move to the Premier League with Arsenal speculated to be interested.