Kell Brook and Frankie Gavin top what is an action-packed bill at the O2 in London on Saturday night, with no less than three world title fights.

Along with a number of great domestic showdowns to start the night, promoter Eddie Hearn will be delighted with the card he has put together which features a number of 50/50 fights as well as the top names in the UK. 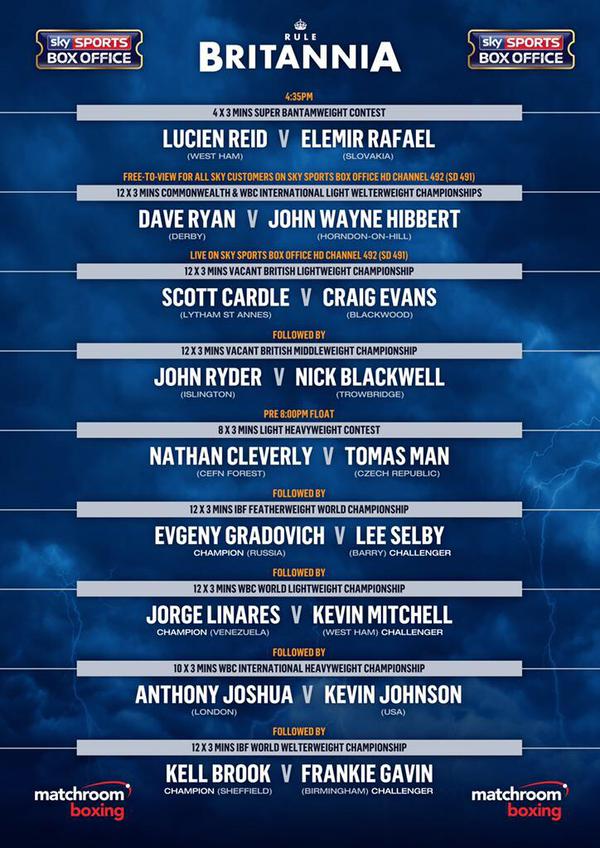 Nathan Cleverly was a late addition to the bill as he begins his quest towards a world title back at light heavyweight, before fellow Welshman Lee Selby hopes to become the new IBF featherweight champion.

However, he has it all to do against the unbeaten Evgeny Gradovich who is making the fifth defence of his belt, while the same could be same for Kevin Mitchell who takes on three-weight champion Jorge Linares for the WBC lightweight title.

Both men have made no secret of how difficult their respective tests are, and it will certainly be intriguing to see how they fare.

In addition, Anthony Joshua makes a significant step up in class of opposition as he prepares for Kevin Johnson. The American has never previously been stopped despite being in the ring with the likes of Vitali Klitschko and Tyson Fury, and he has been extremely confident this week of his ability to cause a huge upset and beat Joshua.

The headline fight of the night is Brook’s second defence of his IBF welterweight title, with the Sheffield-born fighter insisting that he is going out to “take his head off” when he comes up against Gavin.