Chelsea comes out on top once again, this time in money earned this season, nearing a staggering £100m.

The Blues earned an astounding £98,999,554 this season after finishing first in the Premier League. The massive amount of money is thanks to television revenue, prize money and other payments.

Although Arsenal finished above United, they didn’t make quite as much money as them because of television revenue.

How these numbers are compiled relies on how well the club does as well as how many games they have on television.

Each team was paid an £8,775,160 “facility fee” to help facilitate filming in their stadium. Every team that had 10 or less games filmed receive this exact fee, and for every game filmed over 10, there was an additional £747,176 paid. Manchester United, with 27 matches televised, had two more matches on television than Arsenal, thus the reason the Red Devils earned more overall money than the Gunners.

Over the 20 teams, a combined £1.6 billion was distributed for this past season. 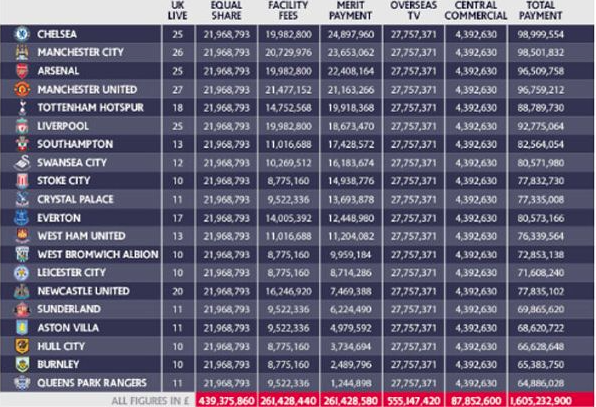