Brad Hogg and Shaun Marsh lead from the front at the WACA.

The Perth Scorchers have secured their first Big Bash League title on the third time of asking, beating the Hobart Hurricanes by 39 runs at the WACA on Friday night.

Shaun Marsh made a stunning return from the calf strain sustained while playing for Australia against England in the ODI series to club an unbeaten 63 off 43 balls to propel the Scorchers to 4 for 191, a total Hobart always looked doubtful of reaching.

Hobart eventually ended the night at 7 for 153 as the Scorchers bowlers shut up shop.

The Hurricanes again looked to George Bailey (58 off 32) to inspire its run chase, but the ballooning required run-rate eventually proved too much for the underdogs.

Brad Hogg was the star with the ball for Perth as the crowd favourite bogged Hobart’s batsmen down with figures of 2 for 17 from his four overs.

Tim Paine (7) fell early in the piece and Ben Dunk (17 off 14) followed two overs later as the Hurricanes failed to truly get on top of the Scorchers’ bowling. 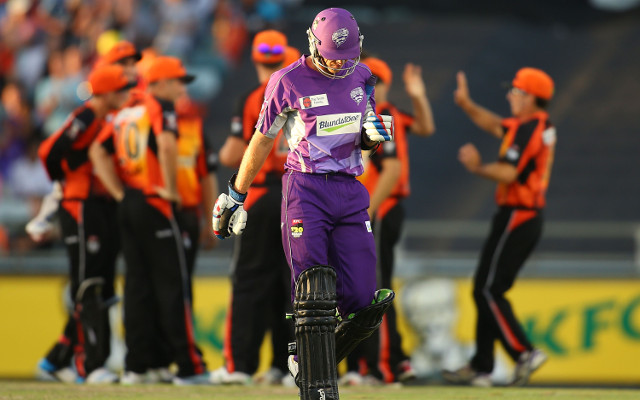 Jonathan Wells used up too many balls in his 24 from 23, and by the time Bailey started to let loose, the match already looked a lost cause for Hobart.

Bailey smashed six boundaries and two sixes, but eventually lobbed a catch to Thomas in the deep.

In the first innings, the Scorchers got off to a sluggish start when Simon Katich (6 off 9) was caught by Dunk off Mascarenhas’s bowling, but semi-final hero Craig Simmons injected momentum into proceedings.

Simmons lashed five boundaries on his way to 45 off 36, before skying a catch to Mascarenhas at third man off a full and wide Gulbis delivery. 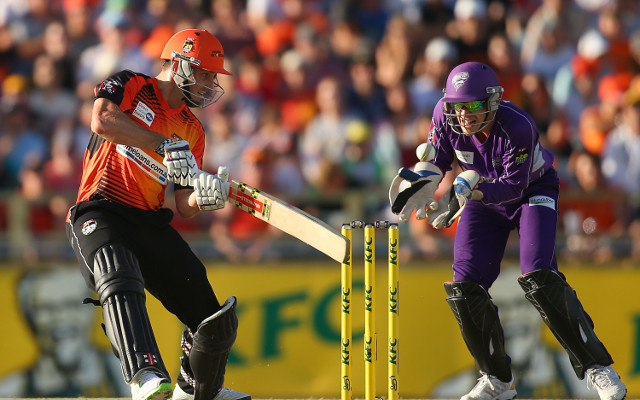 Shaun Marsh smashed Boyce to the long-leg boundary to bring up his 50, while combining with Adam Voges (27 off 17) for a 63-run third wicket partnership.

Shaun’s younger brother Mitchell arrived in the 17th over, who proceeded to lash Mascarenhas for three consecutive sixes in the 18th over, which cost Hobart 24 runs.

Mitchell Marsh eventually fell for 37 off just 12 deliveries, before Nathan Coulter-Nile (4 off 3) came in for some late mad-dash runs between the wickets to close out the innings.

The Hurricanes do have some consolation in that they will feature in the Champions League T20 tournament, along with the Scorchers.