Peter Wallace was philosophical when asked about his roller-coaster journey through the NRL in the past 12 months.

After being told by the Brisbane Broncos he was not in their long-term plans, Wallace struggled to find a club willing to take him on.

Until he landed back at the foot of the mountains in Sydney, where he has not just found a starting role but will be given the reigns to the side, along with Kevin Kingston, for the 2014 NRL season.

“It’s an up-and-down game. One day you’re gone and the next day you’re back.

“It’s just great the club’s put faith in us to lead the boys around and we’re going to do everything possible to make sure we do a good job.”

Wallace was forced out of Suncorp as the Broncos looked to land the prized signature of former Dally M medal winner Ben Barba.

And while he was grateful to the Panthers for a second chance, Wallace said he did not expect to be given a senior role in the side quite so soon.

“It came as a bit of a surprise, it was unexpected,” the playmaker said.

“I’ve obviously been asked to do the job based on what I’ve been doing around the place so far.

“But I feel honoured. It’s a very proud moment.”

Kingston was seemingly on the outer at Penrith after being told he would not be needed in 2014, only for the club to change its mind and sign him to a one-year deal for 2014.

And whether is it a pre-emptive strike to keep him at the club from next season onwards, the 30-year-old was also given an important role in a team many are tipping a much-improved showing from this season.

“I’m really rapt to get another chance at success,” he said.

“I don’t know how long the career’s going to last for, I’ve just got to do my best and hopefully the team goes well so we can play finals footy.” 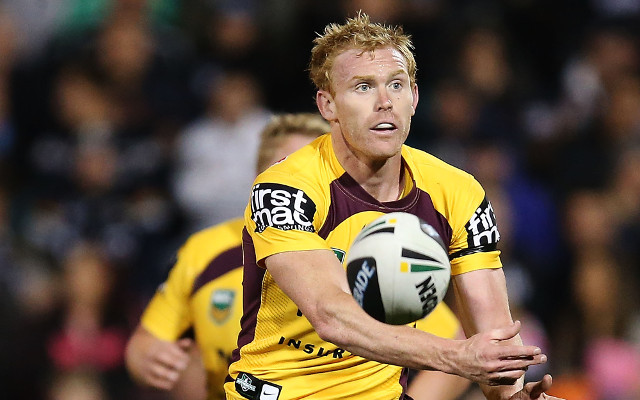 Peter Wallace signs with Penrith Panthers on a three-year deal