All the latest headlines from the Italian newspapers with transfer speculation and pre-season results ahead of the new Serie A season. 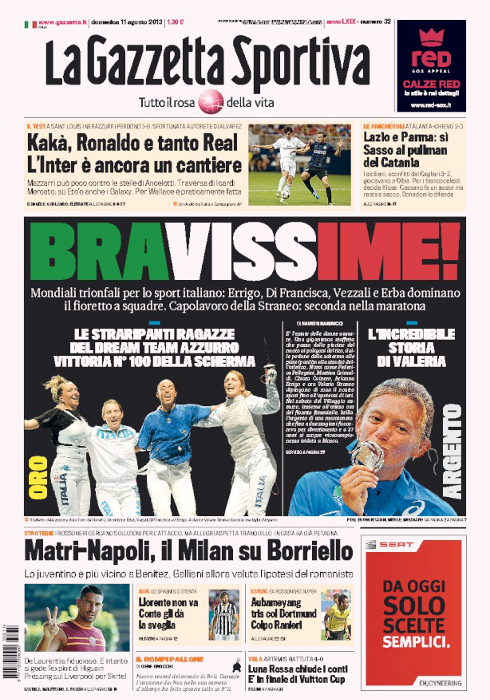 – Inter suffered a 3-0 defeat to Real Madrid on Saturday, with Gazzetta suggesting that they are still a building site with coach Walter Mazzarri unable to do much against Carlo Ancelotti’s side.

– With Alessandro Matri set for Napoli, AC Milan have looked at the possibility of a return to the club for Roma striker Marco Borriello.

– As a result, Inter coach Walter Mazzarri is expected to re-enter the market for reinforcements ahead of the new season with midfielder Fernando at the top of his list.

– Lazio striker Miroslav Klose seals 1-0 win over Crystal Palace as the club continue their preparations for next weekend’s Super Cup clash with Juventus.

– Italy boss Cesare Prandelli is looking for another Antonio Cassano to provide the creative flair in his side ahead of the World Cup qualifiers.

– “Now for Zuniga!” Juventus ready to push for move to sign Napoli winger Juan Zuniga, but if that fails then they could look at Parma ace Jonathan Biabiany.

– Inter take a real hammering against Real Madrid with Ancelotti crushing Mazzarri’s men 3-0 in the USA.

– Gennaro Gattuso is excited ahead of his debut as the coach of Serie B side Palermo, with the club looking for an immediate return to Italy’s top flight next season.