Guard at gated community said while distraught the sprinter did not speak of a burglar.

Click here to watch a live stream from the South African court-room.

A South African court heard that Oscar Pistorious told a security guard at his Pretoian home that “everything was fine” soon gunshots run out into the night.

Pistorious is charged with intentionally killing his then girlfriend Reeva Steenkamp, by shooting her while she was inside their en suite toilet.

The Paralympic athlete has pleaded not-guilty to the charge stating he through the former model and TV presenter was a burglar, and only shot through the closed door because he through Steenkamp was in bed next to him.

Pieter Baba, who works as a security guard at the Silverwoods Country Estate in Pretoria, testified that when he phoned the athlete to investigate the shots, Pistorius told him “security, everything is fine.”

But Baba noticed the Paralympian was crying. “Not everything was in order as Mr Pistorius was telling me,” he said, “I then tried to speak to Mr Pistorius so that he can calm down.”

The security guard said the phone connection was lost, then he received another incoherent call from the sprinter.

“He just started crying over the phone,” said Baba, adding: “That’s when the line went off again, my lady.”

Pistorius, 27, has denied intentionally killing Steenkamp and has pleaded not guilty to three other charges, including one of firing a gun through a moving car’s sunroof and to illegal possession of ammunition.

Baba, wearing a collared red shirt and speaking through a translator, recounted that he entered Pistorius’s house to see the runner carrying mortally injured Steenkamp down the stairs.

“My lady I was so shocked,” said Baba, “I couldn’t even think for a few minutes.”

Defence lawyer Barry Roux questioned Baba if he heard the athlete correctly. “Did Mr Pistorius say ‘everything is ok’ or ‘is he ok’?” asked Roux.

Roux indicated that Pistorius would take the stand to give his account of events. 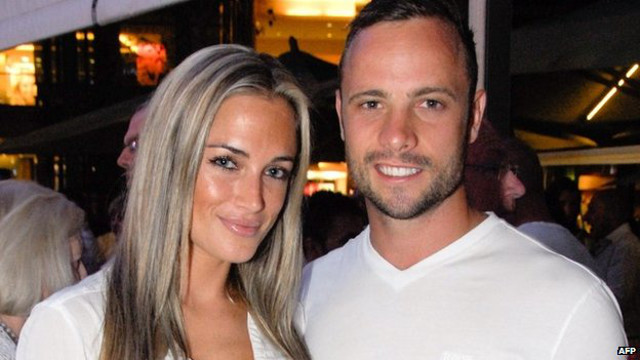 Earlier, the court heard emotional evidence from an ex-girlfriend of Pistorius, who testified that the Paralympian often carried a gun with him and once fired at a traffic light after a confrontation with police.

Samantha Taylor, who met Pistorius in 2010 when she was 17 years old, tearfully described the sprinter as someone familiar with guns, prone to fits of anger and an unfaithful boyfriend.

Taylor took to the stand in the morning, testifying that in 2010 on the way back from a day trip to a popular city getaway, Pistorius was in a car that was pulled over by the police for speeding.

When a police officer inspected Pistorius’s weapon, left on a seat when he exited the car, the sprinter became angry, “Oscar shouted at the policeman and said he shouldn’t touch his gun,” said Taylor.

He later shot at a traffic light, “out of spite after being stopped.”

“He was angry at the police after being stopped, thereafter when they wanted to fire a shot they found it funny,” she said, referring to Pistorius and a friend who was with him at the time.

“Did you know, did the accused own a gun during your relationship?” asked state prosecutor Gerrie Nel. “Yes, my lady,” said Taylor.

“How did you know that?” pressed Nel. “He kept it on him all the time, my lady,” said Taylor.

Frequently breaking down in tears, Taylor, a softly spoken woman with Bambi eyes, dressed in a white jacket, recounted the history of the pair’s troubled relationship.

Taylor said they met at a rugby match and later “he added me on Facebook.”

Their relationship ended in 2012, Taylor claimed, because “he cheated on me with Reeva Steenkamp.”

Pistorius took Steenkamp to the South African Sport Awards on November 4 that year.

The couple denied being together at the time. “We’re just friends. I promise I’ll tell you if there’s anything more,” said Steenkamp when asked about her relationship with Pistorius at the event to local newspaper City Press.

“It’s just a coincidence that we’re sitting at the same table and arrived in the same car,” she said.

Taylor also dismissed the defence’s assertion that witnesses heard Pistorius and not Steenkamp scream on that February 14.

“That is not true, he sounds like a man” when he screams, she said.

Pistorius watched Taylor as she was consoled by her sister, clenching his jaw so hard the tendons in his cheek bulged.