TNA UK Tour Update: The final roster for the event as been announced, and will feature Kurt Angle, Awesome Kong, Austin Aries, Matt Hardy and many more…

Angle, a record five-time TNA World Heavyweight Champion, has recently returned to in-ring action after a lengthy spell out through injury, and will no doubt be eager to get the British fans back on their feet. On the 2014 tour, Angle was inducted into the TNA Hall of Fame.

Aries defeated Low Ki on the most recent episode of TNA IMPACT to win his sixth X Division title. The creator of ‘Option C’, Aries is the second most successful wrestler in the division’s history, behind only eight-time champion Chris Sabin.

Awesome Kong, a former Knockout’s Champion, returned to the company earlier this year after a five year absence. The prospect of seeing her go head-to-head with the equally fearsome Havok is not one to be missed.

Brooke has recently been away from TNA competing on American reality show – ‘The Amazing Race’. But she’s back with a vengeance, as she seeks to get one over on her ex-boyfriend, Robbie E, who forms one half of the Bro Mans tag team alongside Jessie Godderz.

Kurt Angle is inducted into the TNA Hall of Fame during the 2014 tour:

All events will include a FREE pre-show meet and greet with the finalists of hit Challenge TV reality show TNA Wrestling: British Boot Camp, including winner Mark Andrews.

MAXIMUM IMPACT 7 Tour tickets are available via www.facebook.com/tnawrestlinguk, www.gigsandtours.com/go/tna2015gen, www.ticketmaster.co.uk/TNA-Wrestling-tickets/artist/1008830 or direct from the tour venues. Full details of the UK events are: 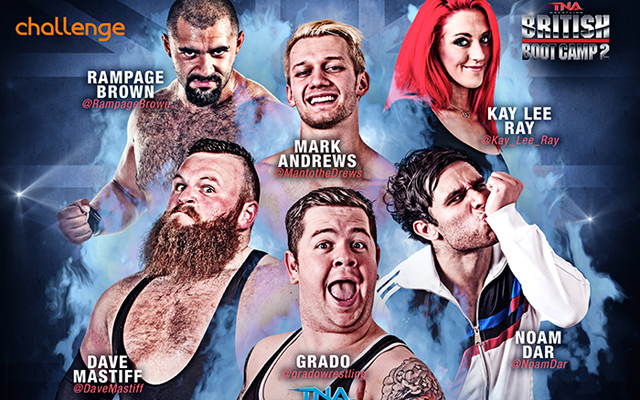