The Oklahoma City Thunder were eliminated from the playoffs despite winning their final game against the Minnesota Timberwolves.

The New Orleans Pelicans took advantage of the Thunder’s cold finish and gained momentum at the end of the regular season before capping it off with a win over the San Antonio Spurs.

The Thunder spent the majority of the season without last season’s MVP, Kevin Durant, as point guard Russell Westbrook emerged as an MVP candidate and won the scoring title with 28.1 points per game.

However, head coach Scott Brooks finds himself on the hot seat due to the Thunder’s inability to hold on to the No. 8 seed and make the playoffs. Brooks does not seem to be worried about his job security though.

“I expect to be the coach next season,” Brooks said in the Thunder’s exit interview.

Brooks may receive the benefit of the doubt since the Thunder have been to the NBA Finals in his tenure while making three Western Conference Finals trips.

Injuries to the Thunder, including Durant and power forward Serge Ibaka, didn’t help matters either.

The Thunder’s lack of a title despite having premier talent in Durant and Westbrook along with current MVP candidate James Harden until the 2012-13 season may be held against Brooks though. 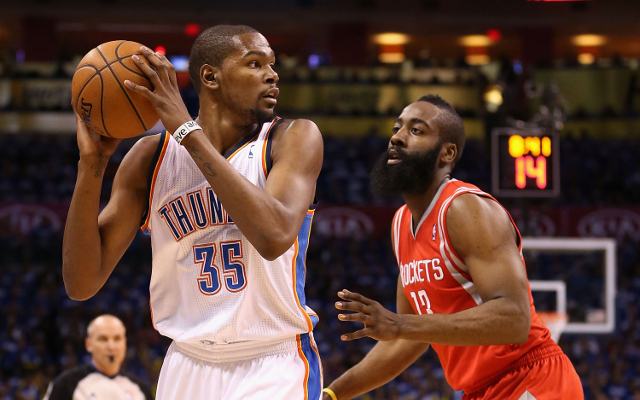