Loss for the Titans puts their NRL finals chances in doubt.

The NRL finals chances of the Gold Coast Titans have been dealt a blow after losing to the North Queensland Cowboys 22-10 in Townsville.

Victory for the Cowboys kept their own slim chances of scraping into the eight alive, but their performance was nothing for outgoing coach Neil Henry to be excited about.

In what was a mistake riddled performance by the Cowboys, and also the Titans, they secured their third win in a row and moved within a victory of the top eight.

Injuries also were of concern for Gold Coast with Luke O’Dwyer (ACL) and Greg Bird (back) failing to finish the game.

Off the back of a penalty in their own half, the Cowboys opened the scoring through the potent combination of Jonathan Thurston to Gavin Cooper.

The try-scorer strolled across untouched as the Titans made the wrong choice in defence as the score became 6-0 to the home side early.

Matt Scott turned the ball over on the first set after the try and the Titans made the home side pay as they worked the ball to the right allowing David Mead to score.

Aiden Sezer hit the right upright on the conversion as the score remained 6-4.

Errors started to mount for the Titans on the attack, as their structure broke down after it looked impressive in setting up their first try.

Ryan James was hit with a shoulder from Ashton Sims who was placed on report for the tackle, and while did hit the Titan in the jaw, it was not intentional.

Both sides continued to be their own worst enemies as the error count topping nine after just 25 minutes.

Eventually the errors resulted in another try as Kyle Feldt showed good strength and speed to get across in the corner. 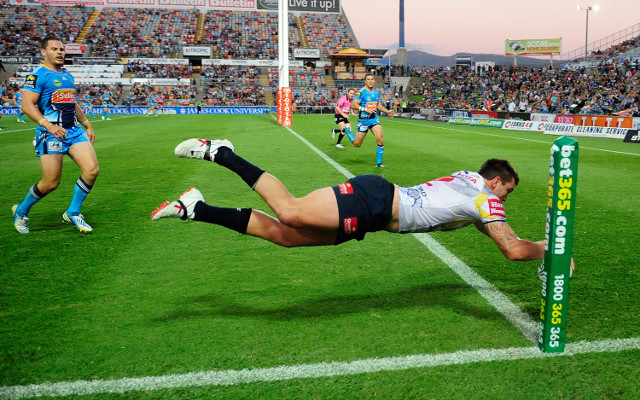 Thurston landed the conversion from the sideline and the home side jumped out to an eight-point lead.

North Queensland led 12-4 at the break with the eventual winner to be the one that will cut down on their error rate, with 16 conceded between the two sides in the first 40 minutes.

Gold Coast had a injury scare when Bird went down awkwardly and struggled to come off the field after attempting a tackle on Cooper. 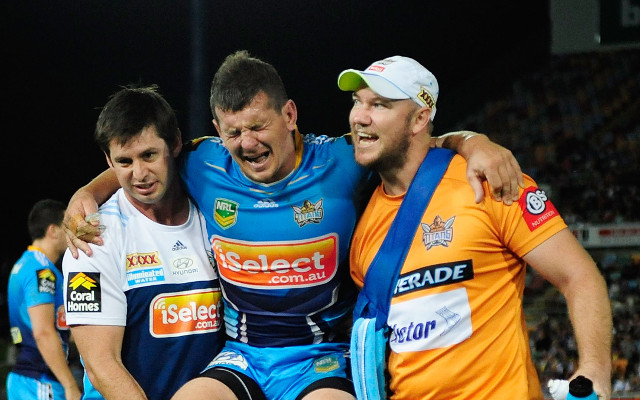 Kevin Gordon scored an important try for the Titans as they kept themselves in touch at 12-10 while Antonio Winterstein looked to have scored his 13th try for the season only to be denied by the video referee,  after Kane Linnett was ruled to have been involved illegally in the play.

Feldt claimed his second for the game when he grounded a Matt Bowen grubber just inside the dead-ball line, as the home side restored its eight-point buffer.

Replays showed the Cowboys’ backrower got to the ball first but doubts remained if he grounded the ball cleanly, with the original call of try going the way of the home side, as they scored what should be a match-winning score.

Thurston missed the conversion to make it 22-10 with six minutes left with both sides bumbling their way to the finish in what was disappointing game that promised so much in the early going.

North Queensland will look to make it four wins in as many games when they host the Newcastle Knights in round 24.

While the Titans will be desperate to get back to form as play the New Zealand Warriors at Skilled Park, in a match that could have a big impact on who plays in the post-season and who watches from the sideline.