fanatix | American Football | NFL | Indianapolis Colts | NFL news: WR Duron Carter, son of Hall of Famer Cris Carter, signs with Colts
The son of one of the greatest wide receivers in NFL history, Duron Carter has a chance to make an immediate impact for the Colts.

The Indianapolis Colts have reportedly reached a deal with WR Duron Carter, the son of NFL Hall of Fame WR Cris Carter, to join the team in 2015.

The Colts made the announcement official on Monday that they had signed Carter after two very productive seasons in the Canadian Football League.

“His length is what jumps out right off the bat and his ability to make the big play with that length in a variety of ways,” Indianapolis Colts GM Ryan Grigson said in the Colts’ press release.

“He has very good quickness and wiggle for his size and has excellent ability to adjust to the ball in air.”

In two seasons with the Montreal Alouettes, Carter has accumulated 124 receptions for 1,939 receiving yards and 12 TDs with a 15.6 yards/catch average.

In a league that is always hungry for more big-play WRs, Carter would probably fit like a glove with any team that has a decent QB.

Carter had numerous off-the-field problems while he was at college, transferring to several different school but only playing a few games at Ohio State back in 2009. He declared for the 2013 NFL draft but was undrafted and unclaimed by NFL teams. 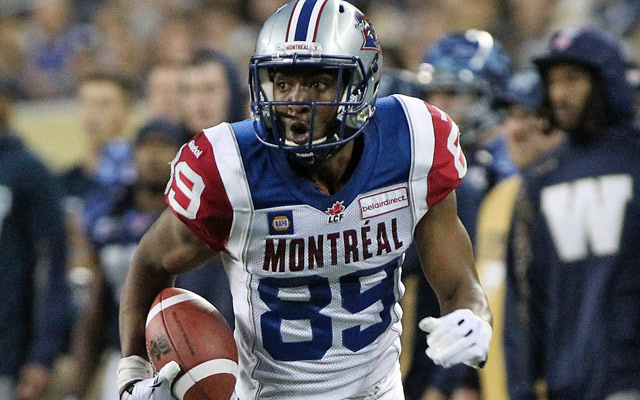