Knights go on a scoring spree to run out convincing winners.

The Newcastle Knights went on a second-half scoring rampage to run out deserving 44-8 winners against a shell-shocked Canterbury Bulldogs side at Hunter Stadium.

In a fiery clash that saw both sides almost come to blows several times, it was the home side won the battle that mattered most – on the scoreboard.

The victory for the Knights caps one of the more incredible one-week turnarounds in recent NRL history, having being thumped by 30 points at the hands of Canberra the round before.

Canterbury were aiming for their fourth win in a row to continue their resurgence after a slow start to the year, but Des Hasler’s men looked all at sea for much of the game.

Apart from an enterprising 15-minute period before half-time, which yielded a try and a penalty, the Dogs attack lacked structure as the home side dominated.

Jarrod Mullen was outstanding for the Knights in laying on several tries through his deft kicking game with captain Kurt Gidley and halfback Tyrone Roberts also starring in the win. 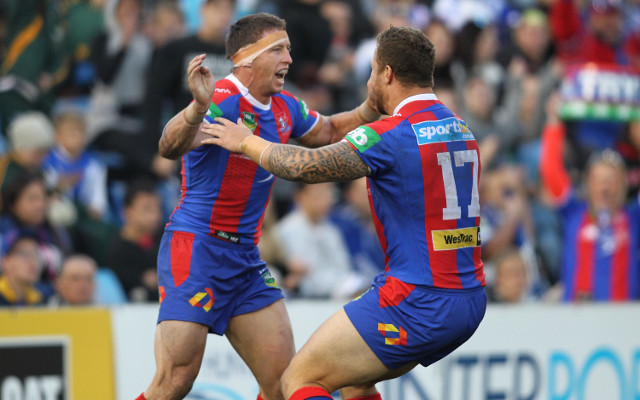 Robbie Rochow opened Newcastle’s account off the back of a penalty close to the Bulldogs line, as Gidley put the backrower through a small gap.

Signs of the tension that was in the game came soon after when Canterbury fullback Ben Barba was driven into the turf headfirst by Joseph Leilua, who was put on report for the hit, as players ran from everywhere to join the mini-fight.

Newcastle continued to pound away at the Bulldogs line as they earned three sets in a row and
eventually the Knights broke the line, as Mullen found Kevin Naiqama with a perfectly-weighted chip to the corner to make it 12-0

Canterbury heaped pressure on themselves with mistakes as they tried to come out of their
own half, and with the Knights looking sharp in attack, the visitors had a task in not falling further behind.

Canterbury earned a vital try just before the break, when prop James Graham, showed off his playmaking skills by laying on an excellent short pass to Frank Pritchard who sliced through to make it 12-6.

The visitors earned a penalty as the siren sounded for half-time front right in front with Rochow pinged for a soft hit on the kicker Trent Hodgkinson.

The two points were taken from right in front of the posts and the visitors gained extra momentum heading  into the break trailing 12-8. 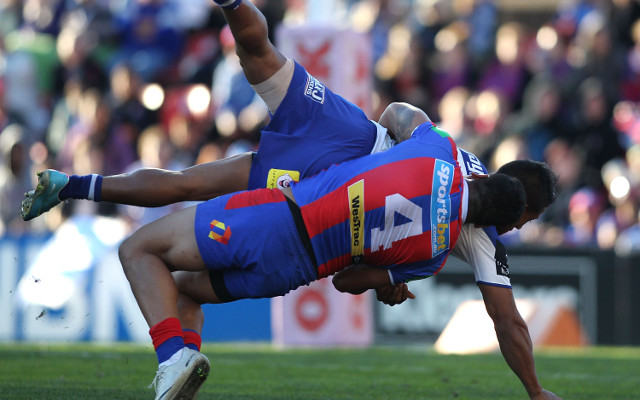 The Knights earned three quick penalties to start the second stanza and James McManus
captalised to ground a handy grubber kick to extend their lead to 10.

Tyrone Roberts laid on another try for the home side just minutes later as he dummied and sliced through the line to set up Darius Boyd as the momentum swung drastically.

Willie Mason and Barba exchanged heated words after a horrible looking tackle on McManus, with the resulting penalty giving the Knights a handy 18-point buffer.

Tempers again boiled over off the restart when Mason took a hit-up only to see him get up in the face of the entire Canterbury side.

In the midst of the ill-discipline the game was quickly starting to get away from the Bulldogs.

Leilua scored off the back of a sensational up-field movement, which started off a quick 20 metre tap before being finishing in the  left corner to secure the victory with 18 minutes remaining with the score reaching 32-8.

Gidley just rubbed salt into the Bulldogs’ wounds as another Mullen kick sets up the play as the Knights showed they were not letting up as the lead stretched out to 30 with a final try to Kevin Naiqama completing the rout.

Making the loss worse for the Bulldogs was a lower leg injury to Tony Williams, who limped from the first in the first half and did not take any part for the rest of the game.