Newcastle United have confirmed that former boss Joe Kinnear has been appointed as the club’s new director of football.

The 66-year-old returns to St. James’ Park after a four year absence to sign a three-year deal at the club.

In a statement, Newcastle United confirmed that the new role will see the former Wimbledon and Nottingham Forest boss report directly to the club’s board on all football-related matter, while manager Alan Pardew and chief scout Graham Carr will report directly to Kinnear according a Sky Sports journalist.

The 66-year-old had a turbulent sixth month spell as interim manager during the 2008-09 season, falling out with both players and national journalists, before health problems saw him miss the rest of the campaign.

The ex-Tottenham defender’s arrival comes less than 24 hours after the veteran manager made several factual errors about his previous time at Newcastle during a bizarre interview with talkSPORT.

News of Kinnear returning to the North-East has brought an angry reaction from Toon Army supporters, with the Newcastle Chronicle highlighting fans’ views on their front page: 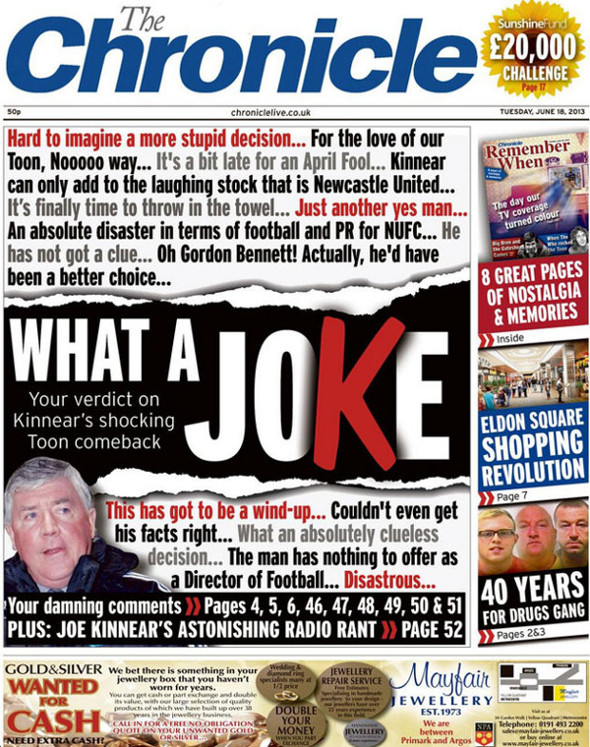 Although reports of Kinnear’s potential return first appeared over the weekend, it is claimed that the arrival has only been officially announced today because Alan Pardew was refusing to provide a statement welcoming Kinnear back to the club.