Titans’ loss soured further with season-ending injury to star player.
The Newcastle Knights have shown they are gunning for a place in the NRL finals and that several sides should be very afraid of an in-form Wayne Bennett side.

After their 46-16 demolition job of the Gold Coast Titans the Knights have climbed into the top eight as they showed what they are capable of on their day.

Despite losing their last four, Newcastle were again steered around the park well by halves Tyrone Roberts and Jarrod Mullen while James McManus enjoyed being on the end of a slick backline in scoring four tries.

As good as the Knights were in the eight tries to three victory, it can be argued the Titans simply did not turn up to play.

In fact the second half was more about damage control as they found themselves down 36-0 at half-time and at a real risk of being embarrassed.

Despite finishing the second half level with the Knights at 16-all, the news nothing but bad for one of the club’s key centres.

Jamal Idris was sent to hospital for X-rays with the early diagnosis is ankle syndesmosis and out for the rest of the season four months. 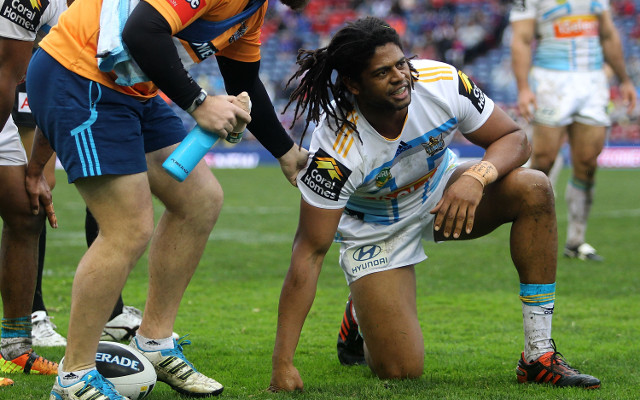 Bad news for Jamal Idris, who has a possible broken ankle. #nrlnewgld #gctitansfamily

Newcastle coach Wayne Bennett said the win was set up by his side’s work and ferocity without the ball as they tackled the Titans out of the game.

“I thought that’s what won us the game,” Bennett said.

“That’s what gave us the points. His (Mullen’s) wonderful kicking game and their back up of that by their great chase and their aggression in defence.

“In the end, they just couldn’t breathe the Titans and the pressure kept building on them.”

The lead grew to 42 for the Knights as McManus scored his fourth which allowed Bennett to make some changes which allowed the Gold Coast to put some respectability back into the final score.

Despite the loss the Titans still find themselves in fifth on the NRL ladder, but their inconsistent form places them well behind the likes of top sides such as Souths, Melbourne and the Roosters.

Gold Coast will look to atone for their mistakes against Newcastle when they face the Penrith Panthers in round 17.

Newcastle will look to tap into form red-hot form again when they face Canterbury, in what is a crucial game to help shape the bottom half of the NRL ladder.