Josh Dugan has capped his return to the NRL with two tries and a sensational all-round game to inspire the St George Illawarra Dragons to a 20-point victory against Parramatta at Wollongong.

After nine weeks away from the game after having his contract torn up by Canberra, Dugan showed how good he can be when he is on-song.

The new Dragons fullback scored two tries in the second half and generally looked dangerous with the ball in hand on around the field.

The former Raider said it was good to get his first game for the Dragons under his belt, and paid tribute to his new teammates for helping him acclimatise.

“It’s a big relief and a big weight off my shoulders, the boys have welcomed me with opened arms it’s just good to be back on the field,” Dugan said.

“I had nerves and I just wanted to fit in and have a good game, and the boys helped me through the week and it showed tonight

“I thought my fitness would be a bit behind tonight, but it wasn’t too bad tonight, and without the boys I wouldn’t have got through it as well as I did.” 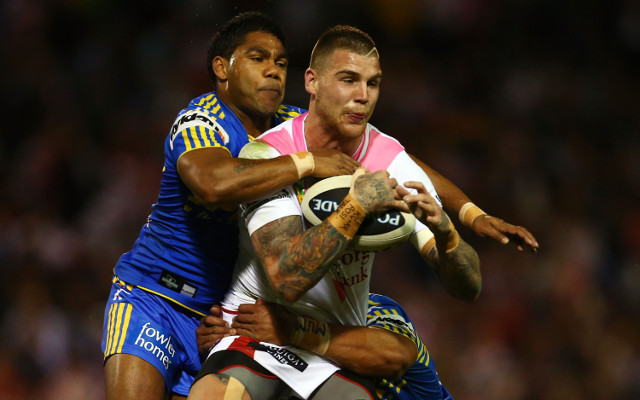 The win snaps a three game losing streak for the Dragons.

Parramatta’s Reni Maitua said the side’s preparation did not give an indication they would lose 32-12 against the Dragons.

“Everything we tried we didn’t work out, everything they threw at us it worked for them,” Maitua said.

“It’s just attitude we need get that right, we thought we had a good week at training but we put in a poor performance tonight.”

The Dragons played from in front when Trent Merrin scored and Jamie Soward converted to make it 6-0 to the Dragons after just two minutes.

The Eels gained relatively easy metres up the middle as they won the battle of the ruck inside the
first 15 minutes.

However, penalties continuing to hurt the Eels chances early in the game after giving away twice as many as the Dragons, who earned several handy passages out of their own half.

Dragons captain Ben Creagh scored for the Dragons off the back of another Eels penalty as the home side looked impressive when on the attack. 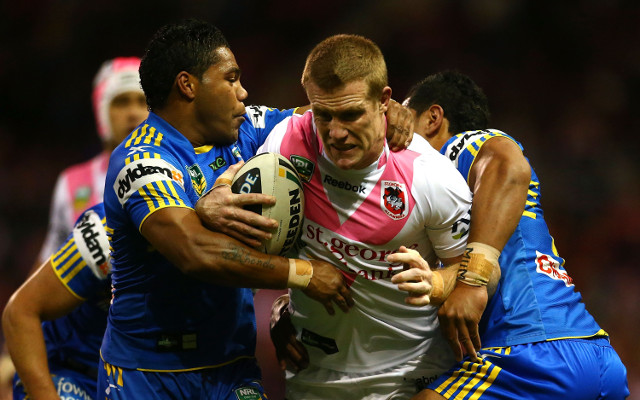 Parramatta have now conceded 21 tries after penalties to easily lead the NRL in the unwanted achievement.

Dugan showing some early impressive signs as his ball-running from the back added an extra dimension to the Dragons’ attack.

A 50 metre surge up-field but Dugan off the back of a kick-return, the home side scored again as Daniel Vidot  cruised across the line after an excellent cut-out pass by Soward.

St George Illawarra continued to look dangerous on their left edge as Vidot scored his 36th try of his NRL career and fourth this year to give them a 16-0 lead.

Parramatta had just as many chances in the first half as the Dragons, but due to a lack of polish and
at times rushing their decisions, they remained on nil at half-time.

Vidot got his second for the half when he powered his way across the line to complete a dominant first half for the Dragons, who led 20-0 at the break.

Dugan made a perfect start to his Dragons’ career as he scored off the back of a Soward kick as the Dragons put their foot on the Eels’ throats.

The one-time NSW player looked destined to score his second as a Dragon but was smashed in an excellent one-on-one tackle by Jarryd Hayne.

Parramatta finally scored after Chris Sandow set up Peni Terepo for his first try in the top grade, but at 26-6, the Eels still had plenty of work to do with less than 20 minutes remaining.

Dugan looked to have scored his second for the game, only for it to be overruled by the video ref who ruled Michael Weyman had interfered with the defensive line.

Finally, Dugan would to be denied just minutes later after an accurate chip-kick found the new Dragons fullback unmarked to cap the rout.

The win is just the Dragons fourth of the season and easily their highest scoring as they look to stay on a roll when they face Penrith next weekend.

Parramatta continue their horrible season having lost four out of the past five games as prepare to travel north to face the Cowboys.