Predicting the winners, the upsets and much more.

Following the conclusion of the regular season on Wednesday night, the NBA play-off bracket is completed and it is time to predict who will prevail in the first round and beyond.

The Miami Heat and Oklahoma City Thunder clinched the No.1 seed in their respective Conferences, and are arguably favourites to secure a safe passage through the field to set up a repeat of last year’s Finals.

However, there are intriguing match-ups across either Conference, in what will undoubtedly prove to be a thrilling and tightly contested month of games. 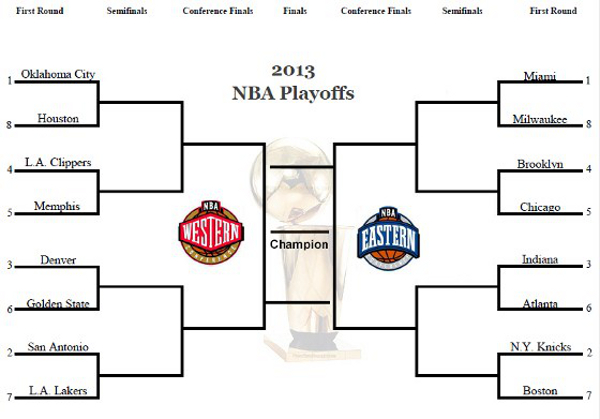 Firstly, looking at the picture in the East, it has been clear all season long that the Miami Heat are focused on securing another championship.

LeBron James has spoken about how personal achievements come secondary to those with the team, and it is difficult to see them having any problems against the Milwaukee Bucks in the opening round.

It will get complicated thereafter, depending on whether the Chicago Bulls and New York Knicks prevail. The Bulls have shown this season that they have the personnel to physically unsettle and “bully” Miami, and despite the absence of key components of their roster through injury, will be a tough proposition for Erik Spoelstra’s men in a potential second round clash.

The Knicks have been touted as contenders this season, and with Carmelo Anthony in such good form it isn’t difficult to see why. J.R. Smith is favourite for the Sixth Man of the Year award, and New York have several veterans who have been and done the play-offs. The biggest concern will be the Boston Celtics, who are a formidable team to face in the opening round.

As a result, it wouldn’t be too much of a surprise if we were to see a Miami-New York Eastern Conference Finals, with the Knicks to overcome their traditional post-season troubles in reaching such an advanced stage

In the West, the stand-out clash is arguably the Los Angeles Lakers against the San Antonio Spurs. Despite the loss of Kobe Bryant through injury, the Lakers showed in their final two regular season games that they have a team capable of causing problems.

The Spurs have been rocked by injuries in recent weeks, and will be hopeful of patching their troops up and getting them fit for the post season. Much will depend on the fitness of the likes of Tony Parker, Kawhi Leonard and Manu Ginobili, but with a healthy line-up they should squeeze past.

The Denver Nuggets will face a tricky opponent in the first round, with Stephen Curry leading the Golden State Warriors into the play-offs. However, the Nuggets have looked strong this season, reflected in their third seed, and will perhaps be too much for the Warriors.

While the Los Angeles Clippers take on the Memphis Grizzlies, the Oklahoma City Thunder come up against a familiar face in James Harden and the Houston Rockets. Both the Clippers and Thunder should have enough to see off their rivals, with Kevin Durant eyeing up an immediate return to the Finals.

It is difficult to picture the NBA Finals without Oklahoma City and Miami, but the latter could face a few bumps in the road along the way. The Heat are rightfully favourites to be crowned champions again, the question is who can stop them?