The Manly Sea Eagles announced they are back as a premiership force in the NRL after thrashing the Parramatta Eels 50-10 at Brookvale Oval.

A flurry of points in the final 10 minutes saw the game turn into a rout, but the other big talking point was the sin-binning of Mitch Allgood.

Despite the NRL cracking down on punches being thrown during games, Allgood lashed out at Manly’s Jamie Burher,  before going toe-to-toe with Steve Matai.

Rather than a send off, which would have been warranted given the blatant nature of Allgood’s punches, the Eels forward was sin-binned in the 73rd minute, effectively ending his night.

It was a fiery way for the game to end after Manly dominated from start to finish and again looked like a premiership force.

Off the back of an early penalty Manly cracked the Eels line on the right as David Williams twisted his way across the line to make it 4-0 after Jamie Lyon hit the right-hand upright.

The Sea Eagles kept pace with the time as they made it 10-0 when Brett Stewart cruised across the line after the halves of Kieran Foran and Daly Cherry-Evans directed the traffic well. 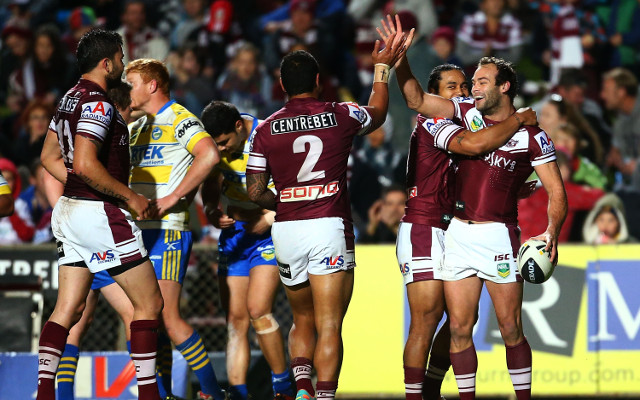 The Eels, who came into the game in last and with nothing to lose, tried to throw the ball around in the hope of broken play unsettling Manly.

However, their lack of confidence and skill saw them cough up the ball in dangerous areas of the field, allowing Jorge Taufau to score and make the score 14-0.

Manly already had earned five linebreaks through the first 20 minutes as they identified several poor defenders in the Eels’ side.

After quick movement by Lyon put Williams into space only the sideline denied the Sea Eagles’ winger from collecting his double early in the night.

A spilt bomb by the Eels saw the home side stretch their opponents to see Taufua score his second for the night as the game quickly turned into a blow-out.

Lyon added the extras as the margin became 20 with 10 minutes left until a merciful break for the Eels. 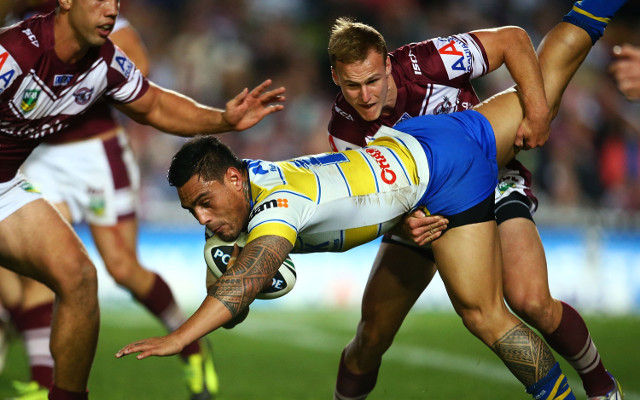 The Eels steadied the ship thanks to a try to Peni Terepo, however, they still plenty of work to do at 20-6 down at half time.

Making matters worse for the Eels was a dislocated patella for Jacob Loko which saw him taken off the field.

Parramatta looked a different side after the break with solid defence being combined with organisation in attack.

The game was then stopped after Glenn Stewart copped an accidental finger to the eye from a a teammate in the tackle and was forced to be replaced.

Manly picked up where they left off from in the first half as Tom Symonds scored with his first touch off the ball after coming  on for the injured Stewart. 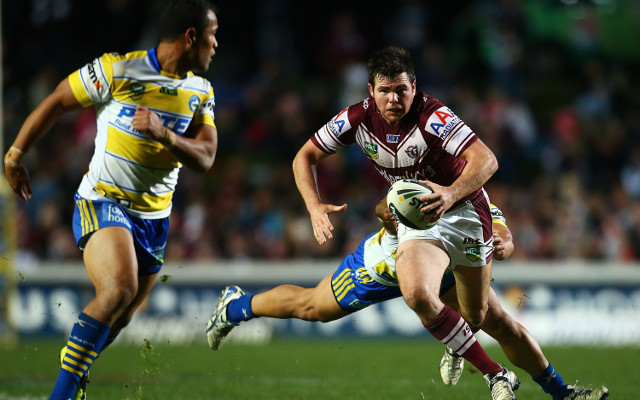 A try to the Eels made it 26-10 before the Sea Eagles answered through Jamie Buhrer to make the result certain.

However, the game erupted as ]Allgood lost the plot after his swinging punch on Burher before throwing a jab to Matai who came in to object  to the treatment his teammate received, with the incident put on report. 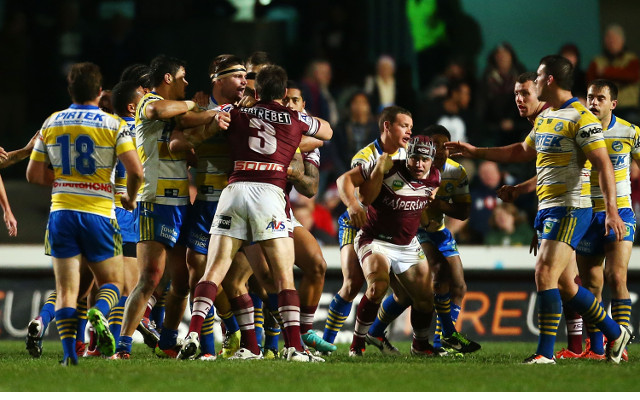 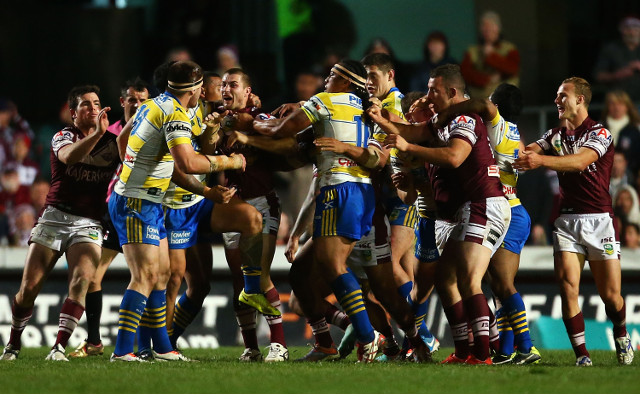 Manly continued to win the fight that mattered on the scoreboard with Taufau completing his hat-trick before a special play by Cherry-Evans saw Williams and Lyon combine.

Amazingly the Sea Eagles cracked the half-century mark as they crushed what was left of the Eels will, with Brett Stewart gifting a try to Foran as the final score became 50-10.

However,  the win was soured with the late injury to prop George Rose with a serious ankle injury.

Manly moved into fourth place on the ladder with the big win with Geoff Toovey’s men hoping several injuries concerns will be resolved by next weekend when they face North Queensland.

Parramatta fall further behind at the bottom of the ladder and will be looking to save face when they play Penrith at home in round 18.