PSV star Memphis Depay has used his Twitter account once again to offer up a big hint he will be a Manchester United player next season.

The Dutchman took a leaf out of Eden Hazard’s book last month, igniting a flurry of speculation over his playing future by ‘favouriting’ tweets linking him with a move to Manchester United.

Depay eventually removed the ‘favourite’ but not until the transfer rumours had reached fever pitch. 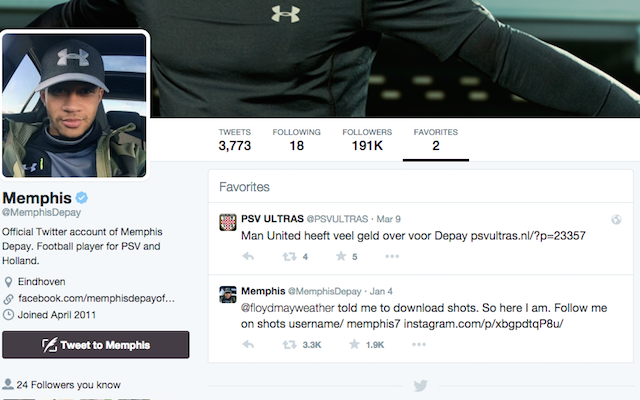 And now he’s been at it again, this time using the social media site to retweet a post by his sponsor; Under Armour.

The message from the sportswear company reads: ‘With rumours flying, where do you think Mempis Depay will lace up his boots next?’. 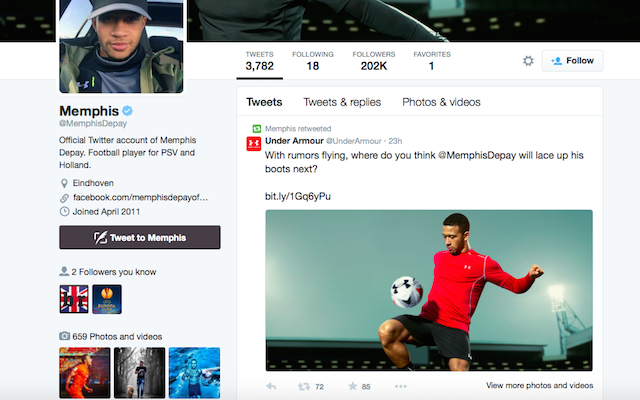 Just yesterday, PSV director Marcel Brands told news agency AP that there was plenty of interest from some of the world’s leading clubs and the club were already accepting the fact that the player was set to leave in the summer.

“The chances are very high that he leaves. If you see what clubs are enquiring about him, they really are the best in Europe,” ESPN quote Brands as saying.

Depay is the top scorer in the Eredivisie this season with 19 goals but United may have to fight off interest from Man City and Tottenham Hotspur for the deadly forward who ESPN believe are also considering bids.