Premiers show they are again the yardstick for the rest of the competition.

Like a champion boxer, the Melbourne Storm absorbed everything their opponent could throw at them before countering and knocking out the challenger before the bell.

That was the story of their fourth win of the NRL season as they defeated a spirited Brisbane Broncos side 32-26 in an 11-try thriller at Suncorp Stadium.

After jumping out of the blocks quickly to establish a 14-0 lead after as many minutes, the Broncos got up off the canvas and shook off their point scoring worries of the past fortnight.

Brisbane outscored the premiers 22-4 over the next hour in a see-sawing battle, before the Storm landed the knockout punch thanks to tries to Billy Slater and Matt Duffie.

Despite being named in the run-on side for the second week in a row, star centre Justin Hodges was a late withdrawal for Brisbane due to a hamstring strain.

The Storm were first to score when Junior Sa’u finished off an excellent run-around play which created a gap in the Broncos defensive line that wasn’t there to open the scoring for the Storm.

A Brisbane mistake led to Gareth Widdop putting Slater into a yawning gap from yet another set move as the Storm jumped out to a perfect start at 8-0.

The Storm were clinical in attack and made the young outside backs of the Broncos pay with the side’s forwards winning the ruck early with quick service to their halves helping their attack.

Slater was soon impeded in chasing a bomb penalty with the classy fullback scoring from the resulting set of six, when Cameron Smith dribbled the ball through the line to see the Storm over for their third try inside 15 minutes. 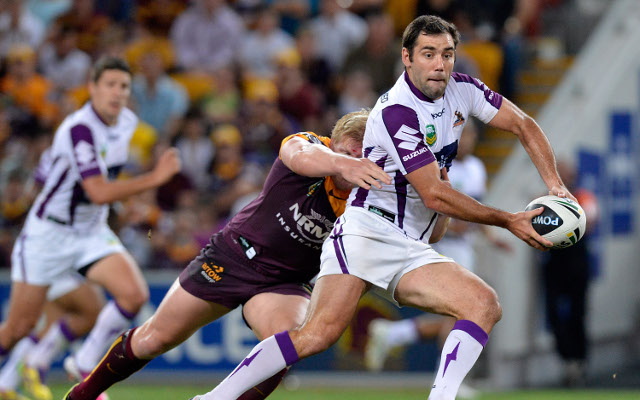 The Broncos started to get into the arm-wrestle but the first 15 minutes was where all of the damage was done.

Josh Hoffman went across in the corner for Brisbane, only for him to be miraculously held-up by Cooper Cronk and Will Chambers.

However, after a video review he was given the four points and Scott Prince’s conversion gave the home side a glimmer of hope at 14-6.

Brisbane did well to get themselves back into the contest especially given Melbourne’s early dominance that could have seem them in front by more.

But in the blink of an eye, Matt Duffie scored after Slater regathered a Cronk chip-kick over the defensive line, undoing all of the good work by Brisbane as the Storm led 20-6 at half-time.

At half-time Hodges said he would be back in the side in round five and added his side was still a chance of claiming the upset.

“I will be right to go next week, I just pulled up a bit sore and I didn’t want to take any chances,” Hodges said.

“We just need to stay composed and get into our game plan, they (Melbourne) scored a couple of early tries early because of kicks, so we just have to cut them down and we’ll be fine.”

Lachlan Maranta went close to scoring early for Brisbane only to see the ball shifted quickly to the other wing to see Hoffman score his second.

Prince’s conversion from the sideline was crucial as it gave the home side impetus as they again trailed by eight 20-12.

Jack Reed stretched out for the Broncos to bag another try and the home crowd erupted as they realised their side was back in the contest as they trailed by just two.

However, Broncos’  bench player David Stagg was helped off the field with possible ligament damage to his left knee and took no further part in the game.

Hoffman scored his third for the night as he showed sensational poise to touch down while in mid-air and being tackled by the Storm cover defence as the Storm’s lead of 14 after as many minutes had evaoprated.

But befitting of the tag of champions, the Storm hit back as Slater solidified his reputation as one of the game’s great attacking weapons after hauling in a Cronk chip-kick, before showing great strength to get the ball to ground.

It was Slater’s 144th try for his career, putting him into the top-10 all time, underlying his amazing strike-rate after 227 games in the NRL.

A brilliant team try for the Storm that saw the ball travel through five sets of hands, allowed Duffie to grab his second try to make the score 32-22 and the embers of Brisbane’s comeback were all-but extinguised.

Alex Glenn crossed to give the Broncos another sniff at victory, but Prince’s sprayed conversion made the Storm breath easier at 32-26.

Despite scoring a hat-trick on the wing, Josh Hoffman’s ended badly as he limped from the field late in the game with a calf injury.