After losing to his Mexican rival in their first meeting, Pacquiao produced a memorable performance to overcome a poor start to break down Morales’ defence.

Pac-Man eventually claimed a win with a stoppage in the 10th round with Morales all at sea after a barrage of punches from the energetic Filipino.

Given that Barrera had just inflicted a first loss on Prince Naseem Hamed and had defeated Erik Morales, this looked like a complete mis-match.

Pacquiao was floored in the opening round and so it appeared to be staying true to form, but Pac-Man refused to buckle and peppered his Mexican rival with shots from all angles.

Barrera was sent to the canvas in the 11th round and his corner had seen enough and called an end to the fight.

These two have embarked on an epic rivalry which has seen them go to war four times over the years, but the second meeting was arguably Pacquiao’s best.

After the first fight was judged a draw, both men went toe-to-toe again and inflicted some serious pain on one another. However, Pacquiao edged it as while each fighter had one scorecard comfortably in their favour each, the third judge gave it 114-113 to Pac-Man.

Pacquiao would suffer one of his worst losses in his career with a knockout loss to Marquez in 2012, but this bout certainly helped him up the ladder.

This would be the end of the road for De La Hoya as he was outworked and ultimately out-boxed by Pacquiao as he unleashed a relentless torrent of punches.

His hand speed coupled with his accuracy had his opponent backed up in the eighth, and with Pacquiao continuing to pierce through his defence and land shot after shot, the fight was called off as Pac-Man continued his march through the rankings and divisions. 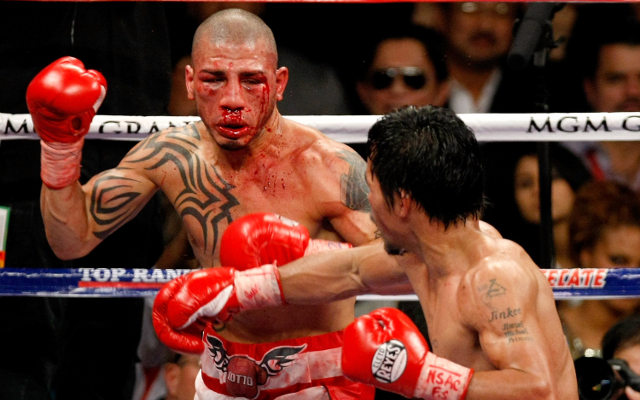 Recent wins against Brandon Rios or Chris Algieri could have made this last spot as Pacquiao proved his doubters wrong after two crushing back-to-back losses.

However, the performance against Cotto was sensational and a look at the Puerto Rican’s face in the latter stages of the fight tell the story.

Somehow, Cotto managed to survive through to the 12th round, but while he couldn’t find his target and Pacquiao continued to land at will, it was waved off in the closing minutes with the Filipino once again putting on a show.