Dominant Queensland hand out a football lesson in fiery clash at Suncorp Stadium.

Queensland had not lost the first two games of an Origin series for the past 10 years and they again showed why, rising an early 4-0 penalty country and the wave of support at a sold-out Suncorp Stadium

Justin Hodges said the Queensland pack did the job in the early going as they gave their fast men space to move out wide.

“I thought our forwards were fantastic tonight and our kick-chase really laid the platform for us early in the game,” Hodges said.

“I tried to get into dummy half when the forwards get a bit so we can get them forward, but the big guys did the job.” 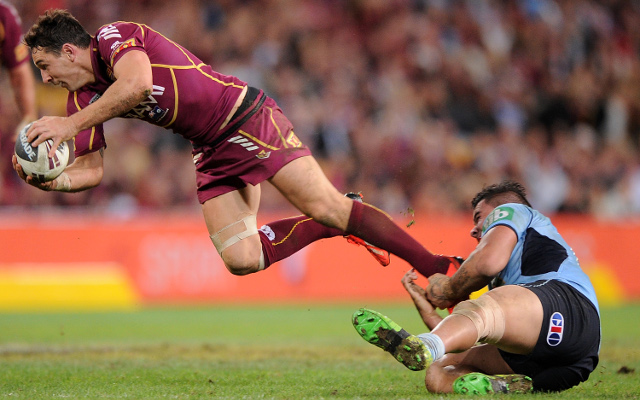 NSW skipper Paul Gallen admitted his side were simply a step behind from the opening changes and found it hard to get back into the arm-wrestle.

“It was tough night tonight and they started really fast and got the win,” Gallen said.

“We have got to improve everywhere and get into the contest really early,they had a lot of things go their way, but we’ll improve and so will they.”

Greg Inglis, who celebrated his 20th Origin appearance in the win, said he expected club-mate Nathan Merritt to be back in the NSW side for game three, despite the Blues’ winger being a liability in defence

“He did his job tonight and did as well as he could, it’s tough coming up here (Queensland) for your first Origin game but I have no doubt he’ll be back for the third game,” Inglis said. 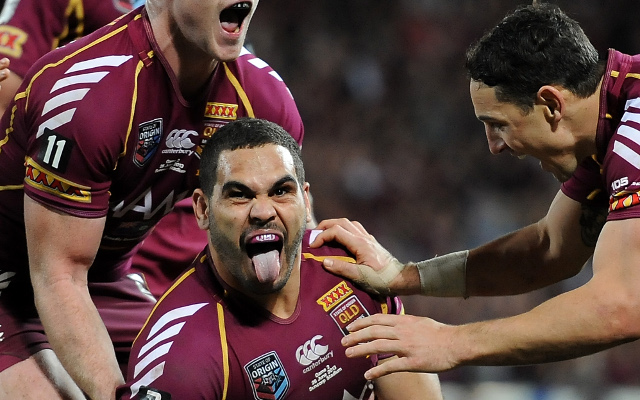 With chants of ‘Queenslander’ shaking Suncorp Stadium to its foundations, the Maroons earned an early penalty to see them get onto the front foot and Sam Thaiday barging his way over to complete the perfect start to the game for the home side.

As opposed to the first game for the Maroons they began with plenty of energy as Jonathan Thurston slotted the conversion to make to lead 6-0. 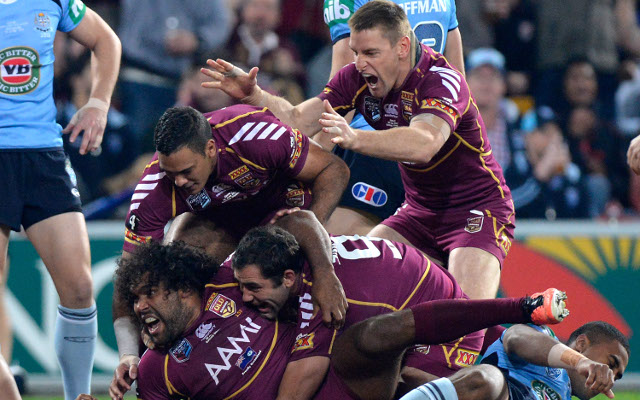 The Maroons heavily attacking the right edge of the Blues’ as they continued to target James Maloney.

A cheap turnover and a penalty for a strip in the tackle saw Thurston line up for a shot at goal, which went in off the left-hand upright to make it 8-0 after just nine minutes.

Cooper Cronk and Cameron Smith were exceptional with their kicking game early which was backed up by their teammates with a sensational kick-chase game.

A Michael Jennings tackle on Thurston as the kicker allowed the Maroons to pile on even more pressure, in what was an unrelenting attacking effort by the home side.

Corey Parker crossed the line only to be held up in-goal with a sensational effort by Paul Gallen and Greg Bird as the Maroons showed no mercy.

Darius Boyd converted the immense Maroons’ pressure into points as Thurston held the ball up well
in going to the line, before cutting out Greg Inglis for the home’s side second try.

Thurston showed why he again he was his side’s kicker, after not taking the shots for goal in Game One, as the slotted the conversion from the sideline to make it 14-0.

When NSW were able to get into position their last-tackle options were not up to standard, but small gaps were starting to appear in the Maroons’ line

Boyd went close to scoring his second when he got on the outside of the Blues’ defence only to see a chip kick skid too far towards the sideline.

Merritt was caught out of position several times in the first half, as the Maroons continued to send dummy runners to his side of the field.

Inglis found free space behind the NSW line after the Blues rushed up in defence, with only a handling error by Boyd  seeing the away side hang on.

NSW counter-attacked well before earning a vital penalty as the shadows of half-time loomed large at Suncorp Stadium.

However, Josh Morris took the pressure off the Maroons when he knocked on as they looked to shift the ball to the right, in what was a golden chance lost.

NSW continued to look out of sorts on the extreme fringes in defence as the Queensland play-makers did an excellent job in drawing in numbers  closer to the ruck.

Queensland enjoyed a 14-0 lead at the break, but it could have been much more given the level of play from the Maroons.

Queensland hooker Cameron Smith said his side could not afford to take their foot off the throats of their opponents.

“It was nearly perfect we had a few errors in the back half at the end of the first half but I was really happy with the intensity they showed in that half,” Smith said.

NSW’s kicking woes continued to begin the second half as their first clearance was charged down allowing the Maroons to go on the attack again.

Josh Dugan, who was playing just his second Origin game, was solid under the high ball for NSW, but he finally coughed up possession as Queensland forced another drop-out. 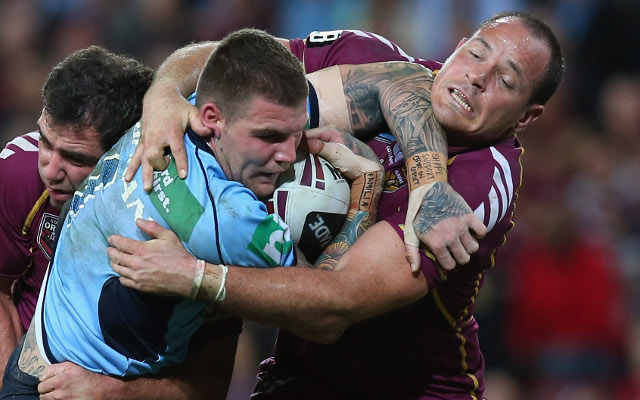 Again the NSW defence and Merritt rushed up on the outside in a bid to jam the Maroons’ but it only resulted in Boyd sliding across in the corner as the score ballooned out to be 18-0.

Queensland twice coughed up the ball in as many sets of six after the second Boyd try but the home side managed to hang on, in a show of desire the Blues simply did not have.

Tempers began the simmer to the surface when Billy Slater and Mitchell Pearce had a coming together with the NSW halfback hit in the head with an elbow, with the Maroons’ fullback put on report
for the shot.

Trent Merrin then tested the new no-punching rule in the NRL when he landed two jabs to the jaw of Brent Tate.

Players came from everywhere to break up the fight, with resulted in Tate, Justin Hodges for Queensland and Merrin and Greg Bird for NSW being sent to the sin-bin in the 58th minute. 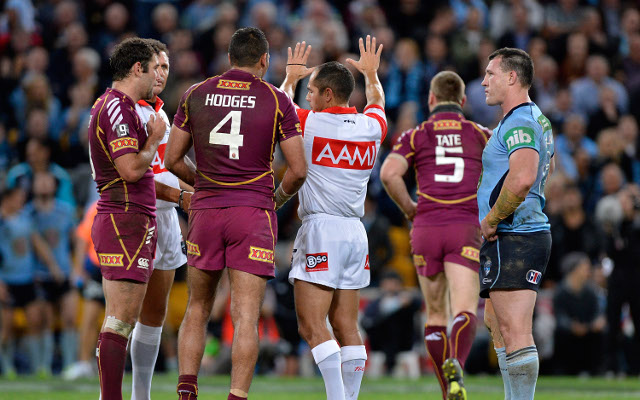 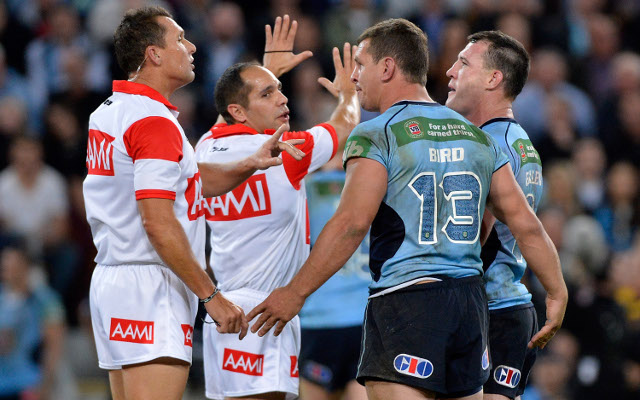 Inglis continued to pour on the punishment as he scored off the back of a kick to make it
24-0 as the Blues continued to be blown off the park.

Brett Morris crossed for the Blues off the back of a Robbie Farah chip kick to make the score 24-6, but the series was destined to be decided it the third and final game.

The Maroons then put an exclamation point on their performance when they slotted a penalty off the boot of Thurston to complete the rout 26-6.