Bulldogs lack bite and fall to just one win in first five weeks of the NRL season.

The odds for a Manly Sea Eagles premiership in 2013 would have shortened again after their impressive 20-6 victory against the Canterbury Bulldogs at ANZ Stadium.

Manly looked likely to keep a third side to nil in just five weeks before a late consolation try to the Bulldogs saw them break that run.

Despite the late blimp on their record, Manly’s work in defence laid the platform for the win, which is their fourth for the year.

Manly second-rower Anthony Watmough said despite having older average age than most sides in the competition, the extra work done before the first round is enabling them to get through the tackling work required.

“We trained really hard this pre-season and with the addition to the coach staff they are getting the best out of us,” Watmough said.

“We just worked hard for one another on our line, it’s something we didn’t do enough last year.”

Despite still missing Test backrower Glenn Stewart to injury, Watmough said the addition of Tom Symonds to the side has meant they have continued with business and usual.

“We we were luck to have him come on board, he was into the side after one week and it looks like he’s been playing with us for a long time,” Watmough said,

Jorge Taufua continued his hot try-scoring run to cross first for the Sea Eagles, with a superb cut-out pass finding its target.

Against the run of play, Manly fullback Brett Stewart broke the line before finding Jamie Lyon in support, to slide underneath the posts and Lyon converted his own try to score a vital six points after just 26 minutes.

Taufau scored his second when he touched-down a Kieran Foran grubber just inside the Bulldogs’ dead-ball line to make it seven tries in his last four games as the score started to get out control for the home side. 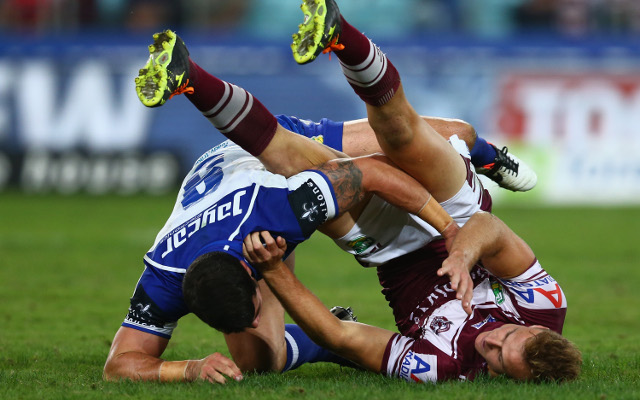 Lyon’s conversion gave the Sea Eagles an 18-point lead in the shadows of half-time in what
was a huge lead in the context of recent history between the two sides.

Canterbury needed to score next, however, the history of team’s leading at half time going on to win the game, all but two teams have completed the job in 2013, meant the Dogs had a big task ahead of the them in the second half.

Manly simply did more with the ball in the first half, off the back of their 60 per cent possession, they made eight tackle busts to keep the Dogs defence on its toes.

Tony Williams and Frank Pritchard were largely invisible for the Dogs in the first stanza with only eight runs for 59 metres between them.

Manly continued with their game-plan and kept grinding the Bulldogs into the ground, happy to make them do all of the work coming out of their own half or defending their line after the resumption.

Ben Barba sent a scare through the Canterbury camp when he got up out of a tackle  clutching at his left ankle, before rejoining the line.

Manly missed a golden chance to up the pressure on the Dogs when Lyon missed an early penalty by his own standards.

Watmough and Michael Ennis started a shoving match as frustrations rose to simmer to the surface
for the Bulldogs, with a bit of feeling creeping into the game.

Manly locked down Barba for much of the game, with high bombs and a good chase from the Sea Eagles not allowing the attacking genius any room to move.

Canterbury started to get possession at the right end of the field, but with less than 20 minutes left, time was running out for them to score a remarkable come-from-behind victory.

Lyon put another two nails in the Bulldogs coffin as he landed a penalty to make the lead 20 ad Manly looked to hold three sides to nil in the first five weeks of the competition, with only 30 points conceded to date in 2013.

However, the new obstruction rules were soon put to the test when Michael Ennis threw a big dummy-pass to score next to the posts, which was his first try for two years.

Despite Tim Lafai slotting the conversion, the Bulldogs still had plenty of work to do to as they trailed by 14 with just seven minutes remaining.

Canterbury did not throw in the towel, but they gave up too much of a head-start to the Sea Eagles to draw level, as the northern beaches side ran out deserving winners to move to the top of the ladder early in round five.