Sea Eagles’ gutsy display not enough to see them take out victory on the road.

The Manly Sea Eagles and Melbourne Storm continued their storied rivalry in the NRL after battling it out for 90 minutes, only to both take away a single competition point.

In what was the first draw of the NRL season, neither side was able to pull clear in golden-point extra time despite a barrage of field goal attempts from all over the field, with the game finishing deadlocked at 10-all.

The clash is likely to reignite the debate about the merits of golden-point versus an alternative such as golden-try as the clash turned into a much-maligned shootout.

Manly were the stronger side for much of the game, especially in the first half, as they turned in a committed effort in defence, as they repelled wave after wave of Storm attackers. 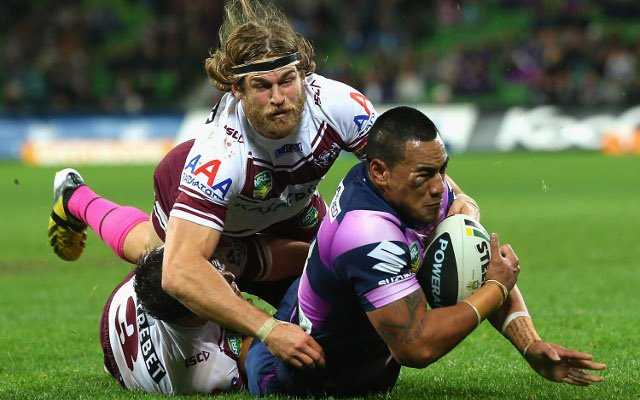 Off the back of an enterprising Kieran Foran run, the Sea Eagles opted for the shot at goal and Jamie Lyon put the visitors in front by two early in the clash.

Melbourne’s kicking game was well-short of what they normally need, giving Manly excellent field position to start their sets early in the game.

Manly scored their first try of the clash after Lyon cleaned up a spilt bomb to make it an 8-0 lead and continue their excellent start to the game.

The Storm kept giving away easy metres up the middle of the field in a continuing and worrying trend in recent weeks for Craig Bellamy’s side.

Bryan Norrie looked to have opened the Storm’s account as rookie fullback Peta Hiku pulled off a one-on-one strip and grounded it in goal, in what was a harsh call against Manly.

Melbourne started to get a better share of field position around the 20-minute mark, but the usual clinical Storm attack looked to operating on less than full cylinders.

Ill-discipline also costs the hosts Melbourne int eh first half as they racked up a staggering 8-1 error count after 30 minutes.

Manly’s kicking game was exceptional, as Foran and Daly Cherry-Evans, at times, elected to kick before the last, which surprisingly caught Bill Slater out of position at the back for the Storm.

The Storm has just a 9-18 completion rate in the lead-up to half-time in what was a very unusual stat for Melbourne as the Sea Eagles took an 8-0 lead to half-time.

Testament to their struggled of late, it was the first time the Melbourne Storm have been held to nil in consecutive games, under coach Bellamy’s guidance. 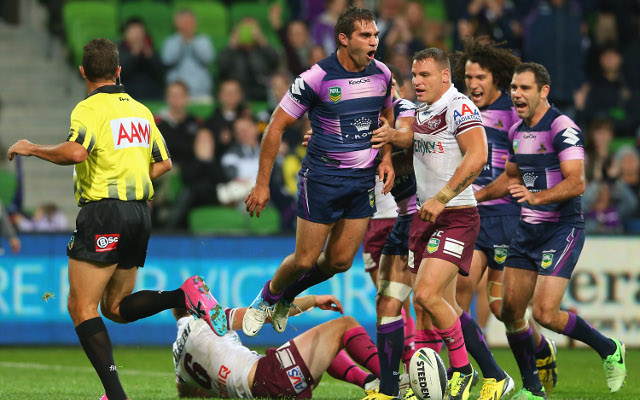 After the resumption, Manly did well to hang on to defend four sets in a row, and testament to the Sea Eagles defence, the Storm took two points from right in front after a penalty to make it 8-2.

Off the back of several penalties and goal-line restarts the Storm enjoyed 85 per cent possession through the first 15 minutes of the second half as Manly mad 104-21 tackles in the same period.

Maurice Blair finally scored for the Storm off a short chip-kick as he flew across the line in catching the ball to make it 8-all.

In one of the players of the year, Cherry-Evans released the pressure-valve on his side by launching a massive kick under pressure, to earn his side an important 40-20.

Manly earned a fortuitous penalty from right in front after George Rose was ruled to have had the ball stripped from him, with Manly sneaking ahead again 10-8 with 13 minutes left. 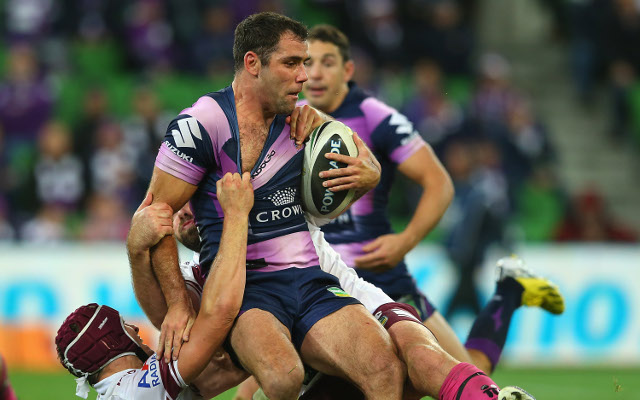 But again the Storm came back hard at their opponents, however, Lyon and Foran were sensational in defence as they continued to hold the Storm up and over the line.

Melbourne slotted a penalty for Manly being inside the ten, to make it 10-all as time ran out, sending the game to golden point.

The Melbourne hooker took an optional restart from the 20m line and earned his side a scrum for his side on the Manly 40 metre line.

The Storm looked to have stopped the clock a second before half-time of golden point by packing a scrum, but the ref called for both sides to change sides in a controversial call.

Matt Ballin soon after was ruled to have lost the ball on his own 40 metre line and the resulting shot from Cronk sprayed to the left.

Justin Horo charged down another Cronk attempt at goal with Gareth Widdop having a shot from 55 metres out in the final salvo in what will go down as one of the games of the season.