Reports from Portugal say Garay is on his way from Benfica. 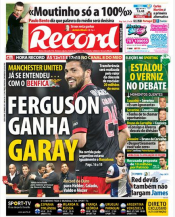 The media in Portugal have said that Garay will be making the switch to Old Trafford for months, having been tracked by Sir Alex Ferguson and now new manager David Moyes.

Journalists in the country are preparing to give themselves several pats on the back as the deal draws close, but Vidic may not be so delighted as the Serb will act as a makeweight for the 26-year-old.

With youngsters Phil Jones and Chris Smalling already at the club, along with Jonny Evans and Rio Ferdinand – who recently signed a one-year extension with the Red Devils – the 31-year-old Vidic will be the one to be sold.

AC Milan are believed to be the most likely suitors with the Italian giants’ patient style favouring the older defender; the United captain is essentially a teenager compared to previous stalwarts Paolo Maldini and Alessandro Costacurta.

Garay meanwhile has enjoyed another solid season with Benfica, with the Portuguese side enduring heartbreak in 2012/13 by missing out on the Primeira Liga title and Europa League to extremely late goals.

The Argentinian has earned 14 caps for his country to date and has also had spells at Real Madrid and Newells’ Old Boys back in Argentina.

The arrival of the centre-back is likely to set United back around £17m (the defender’s release clause) and would signal Moyes’ second signing of the summer and the first big name.