How the Reds are likely to lineup at Selhurst Park.

After Manchester City beat Everton on Saturday it’s vital that Liverpool record a win over Crystal Palace to keep up their Premier League title charge.

Due to the Citizens’ superior goal difference if Manuel Pellegrini’s side win their final two matches then they are likely to clinch the title ahead of the Reds.

Yet as Brendan Rodgers knows anything could happen in those remaining games for City and all his team can do is keep winning their own matches.

Here is how the Merseysiders are expected to lineup against Palace.

It’s been a steady start to life at Anfield for this Belgian, who was brilliant at the beginning of the season but has stuttered slightly more in recent times.

Has been solid at right-back this term when fit and with Tottenham Hotspur’s Kyle Walker in danger of missing the 2014 World Cup, could be England’s only hope in the position as well.

Could well get a call-up to the Three Lions squad in place of Walker after a hugely impressive year with his club in which Flanagan has gone from laughing stock to reliable full-back. 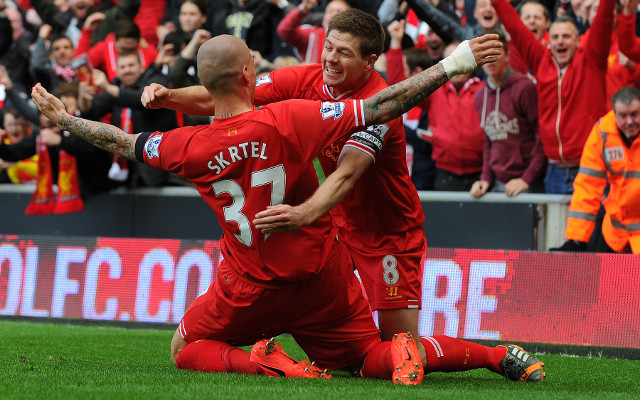 The Slovakian has been the only constant presence in central defence for Rodgers’ side and has generally performed well whoever he is partnered with.

Currently the man preferred alongside Skrtel is £18m signing Sakho, who appears to have the potential to be a stalwart in the starting XI for years to come.