Liverpool’s legendary striker Robbie Fowler has reacted furiously on Twitter, after being accused of using cocaine by Arsenal fans.

The 38-year-old encouraged the Gunners supporters to ‘look a little closer to home’ instead.

The striker was subject to plenty of rumours and chants throughout his career intimating that he was a casual cocaine user, which were all vehemently denied and never proven. He responded with the infamous celebration of pretending to snort one of the lines marking the pitch.

After Fowler mentioned on his Twitter account that Liverpool should ask the Gunners for Theo Walcott plus cash in any potential Luis Suarez deal, Arsenal fans began to ‘troll’ the former England man.

Reacting as few expected he would, Fowler intimated that Arsenal fans should perhaps look to members (or past members) of their own team before accusing him of using the class A drug.

For all arsenal fans calling me coke head… Look closer to home . That is all 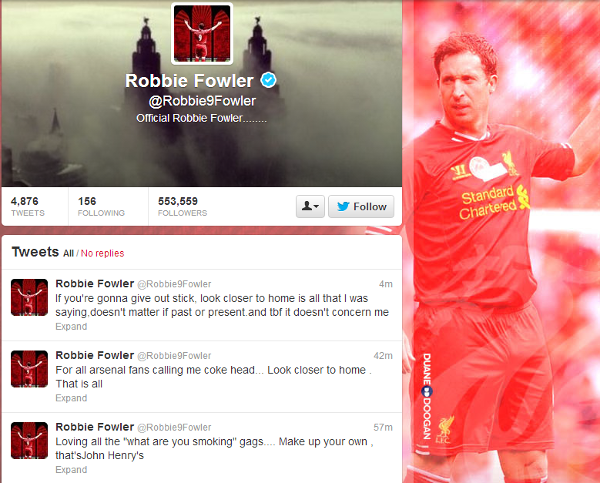