If you have a bad day at work today, just think it could be worse.

You could have made that mistake in front of a national TV audience of millions like Chicago Cubs’ left fielder Junior Lake.

Playing the Pittsburgh Pirates, Lake took to the field in the first inning wearing the teams new away strip pictured on the right below. 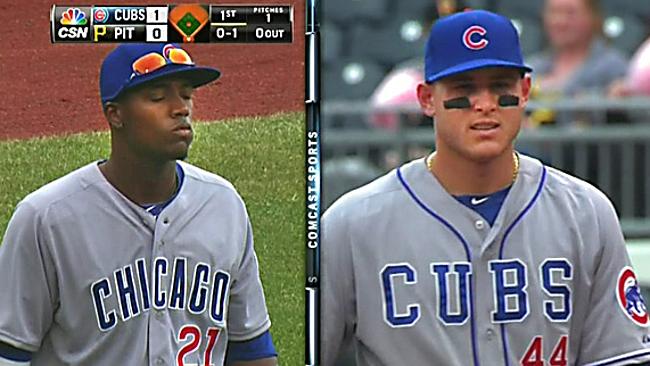 “Bullpen guy [Justin Grimm] told me I had the wrong jersey. I looked and said, ‘F***,’” Lake said after the game.

“Everyone looked at me.”

Needless to say a pretty embarrassed Lake scuttled back to the locker-room to fetch the correct uniform at the end of the first inning.

He said he was confused because both jerseys were hanging on his locker and both were grey.

The Cubs have two grey road jerseys – one with “Cubs” across the front and the other with “Chicago”.

He was supposed to be wearing the “Cubs” one on Thursday. But he wasn’t. “I see two grey, I take the wrong one,” he said.