Winger moves closer to a New Zealand jersey after bagging a brace.

Brisbane winger Josh Hoffman secured his side two points and most likeely a place in the New Zealdn Test side for himself, with his last-minute heroics against North Queensland.

With time running out, Hoffman crossed for his second try of the game, and his seventh in the last three outings, to cap a thrilling 12-10 victory against a gallant North Queensland side at Suncorp Stadium,

Hoffman’s try in the 72nd minute put Brisbane back in front and required great strength and athleticism after some brilliant passing from Corey Norman and a no-look final effort by centre Jack Reed.

Reed had set up the first of Hoffman’s double just before halftime with a deft kick off the outside of his right boot.

The Cowboys, down on troops after the late withdrawal of match-winning fullback Matt Bowen (knee soreness) and tackling machine Dallas Johnson (concussion), had led 10-8 following a converted try to Bowen’s replacement Clint Greenshields in the 58th minute.

Playing his 37th NRL game but his first for the Cowboys, Greenshields dived over after hooker Rory Kostjaysn found a rare hole in Brisbane’s defence. 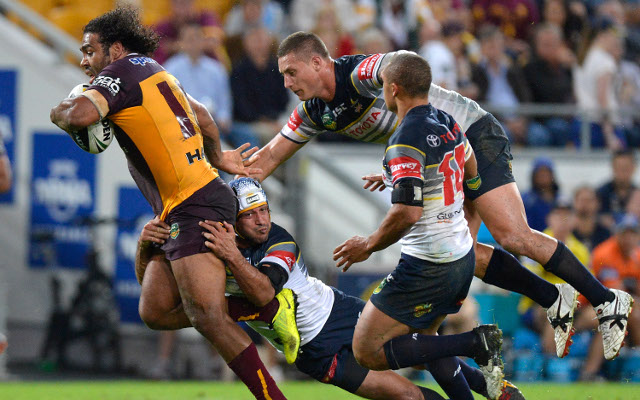 The game was played at a cracking finals pace, the huge turnout of 42,556 fans treated to a thrill-a-minute contest featuring desperate scrambling defence from both sides.

Both packs were brutal as they punched up the middle all night.

New father Sam Thaiday made 36 tackles and ran 123 metres for the Broncos, while Ben Hannant turned in another amazing effort with 42 tackles and 192 metres.

State of Origin hopeful Corey Parker also maintained his outstanding start to the season with another eye-catching 80 minutes, saving what looked like a certain second-half try and making 52 tackles. 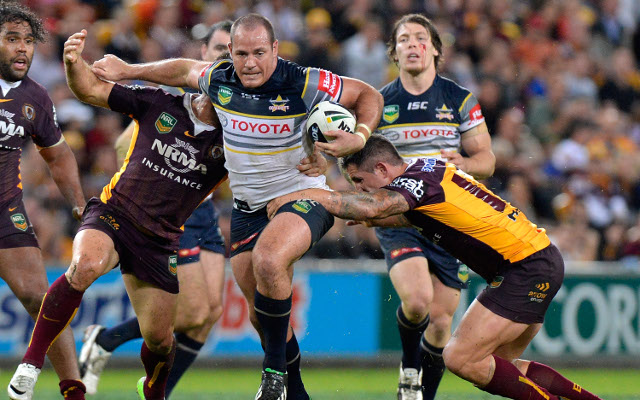 North Queensland’s forwards tried their hearts out, Matt Scott magnificent with 156 metres and 30 tackles alongside his Australian front-row partner James Tamou (118 and 27 tackles).

Cowboys centre Brent Tate deserved a win in his 200th game and he did all he could with 19 tackles to shut down Brisbane’s left-side attack.

North Queensland were aiming for a club record fourth-straight win over Brisbane and, despite being down on troops, looked like causing an upset until Hoffman’s second try lifted Brisbane back into the lead.