Canberra Raiders winger Jordan Rapana has angrily denied claims that he took a dive during his side’s win over the South Sydney Rabbitohs on Sunday.

Rapana was fuming after he was accused of milking a penalty after being tackled by Rabbitohs forward Chris Grevsmuhl on the first half.

According to The Canberra Times, the 25-year-old will visit a specialist on Wendesday for a suspected fractured cheekbone following the collision.

“Maybe they could put some boots on and see how they like it when they cop a shoulder to the head,” Rapana told The Canberra Times.

“It bugged me a little bit, but they’re not in my shoes and they don’t know how it felt.

“It genuinely rocked me and hurt me so I stayed down. I wasn’t trying to milk a penalty.

​”My whole face went tingly and numb, it was pretty sore to be honest. I got checked out on the spot. I was alright, it didn’t knock me out, it just rattled me, no concussion or anything.

“Even now it’s numb, I can’t feel my teeth, it feels like I’ve been to the dentist.

​”I’d like to think I’m a tough player, it gets under my skin a little bit when you hear people questioning my toughness. I know within myself I’ll play on whenever I can. I definitely did not take a dive.”

Rapana returned to the field for the second half wearing protective head gear but suffered a burst ear-drum in a separate incident.

The Raiders star attempted to play with a broken skull last year and had a metal plate inserted.

He admitted that there were NRL players who do take dives, but he says he isn’t one of them.

“I think there are players that do take a dive, just because a finger or hand touches the chin they go down,” he said.

“I do think it’s a bit of a problem, there are a lot of players that do that, but at the same time you’ve got to be better with your tackles and technique so you don’t make any contact with the head.”

Rapana is expected to be out of action for up to eight weeks. 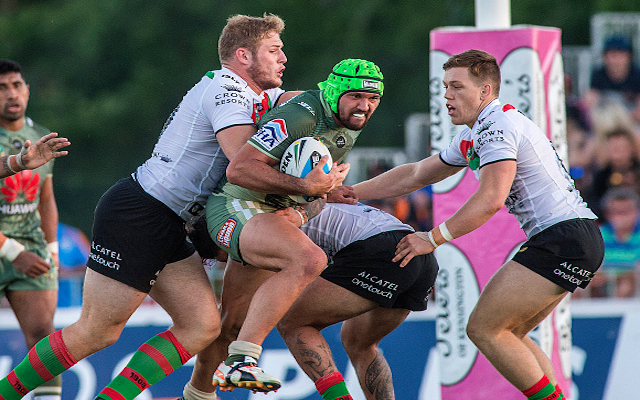